County. In the Salinas Valley it blooms from April 15 to June 5; in the northern part of the county it remains in bloom until July 1, and along the coast until July 15. In the Gavilan Mountains northeast of Gonzales seed of the white sage was sown in 1885, and this species still perpetuates itself in this locality. Purple sage has been reported near Monterey. In San Luis Obispo and Santa Barbara counties all three species occur, but the white sage is not common in San Luis Obispo County. (Fig. 104.)

The distribution of the sages in Ventura County is described by M. H. Mendleson as follows: “Purple sage is most abundant in this county, although there is a large amount of black sage scattered through the interior; but there is only a small amount along the coast. The white sage is the rarest in this county. Fol- 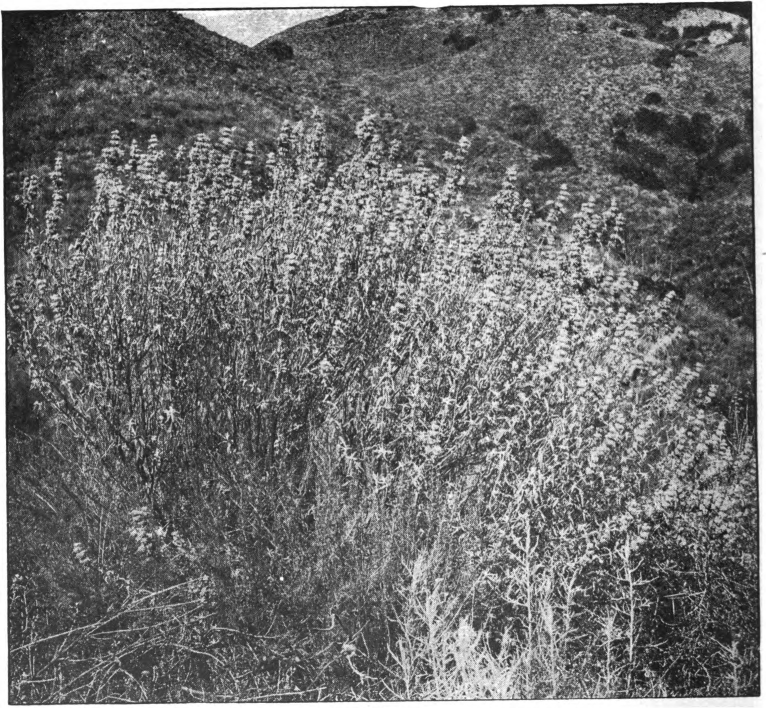 lowing a wet winter, the black and purple sages are about equally valuable for the production of honey. The black sage blooms first, then the purple, and last of all the white sage, the blooming periods usually overlapping. The white sage can seldom be depended upon for a crop, and the honey is inferior to the flavor of that stored from the other two species. The white sage honey invariably granulates, while the black and purple, when well ripened and gathered in the interior, remain liquid; but on the coast they invariably candy. The time of blooming varies from March 1 to June 1, depending on climatic conditions, as rain and a cold or warm winter and spring; but usually it begins from April 15 to 30, and closes between June 20 and July 10.