leaves and long pods has great clusters of white flowers spotted with yellow and purple-brown. Bees have to creep into the large flowers to reach the nectar. The honey is described as thin and watery, but it is rarely obtained pure. Catalpa blooms in June.

CATNIP, CATMINT (Nepeta Cataria). This strong-smelling mint, so attractive to cats, has become established in waste places. The honey is described as dark and strong. It has been highly recommended for bee pasture but is rarely more than a minor aid.

CHAMISE, GREASEWOOD (Adenostoma fasciculatum). Evergreen shrubs with branched clusters of white flowers growing on the mountain slopes of the coast ranges and Sierras in California forming a zone from 500 to 5000 feet. The shrubs bloom from April to June. The honey is light amber with a pleasant flavor but rarely obtained. Chamise is also an important pollen flower.

CHERRY, BLACK (Prunus serotina). A common tree with simple leaves and long clusters of white flowers found in the eastern states and from Canada south to Florida and Texas. It blooms in May. The honey is a reddish-amber with a bitter flavor.

CHERRY, CHOKE (Prunus virginiana) is similar to the black cherry. There are reports of surpluses as high as 60 pounds in Maine.

CHERRY, CULTIVATED(Prunus spp.) blooms very early in the spring when the weather is so poor that bees have difficulty flying. The flowers must be cross-pollinated by insects with pollen from another variety to set fruit.

CHERRY, LAUREL (Prunus caroliniana). An evergreen cherry with laurel-like leaves and clusters of whitish flowers. It blooms very early in the southeastern states (February and March) where it is visited freely by bees. The nectar is used in brood rearing.

CHICKWEED, STARWORT (Stellaria media and spp.). Low, weak, depressed annuals, with small white flowers with 5 split petals (giving the appearance of 10), the base of each of the 5 stamens with a bilobed nectary, the nectar either clinging to the nectaries or collecting in the boat-shaped sepals. Chickweed occurs everywhere in waste places and blooms the year around except in the northern states. It blooms especially heavily in the spring when it is much visited by bees for both nectar and pollen. Beekeepers in widely separated regions report the chickweed is occasionally an important spring stimulant. 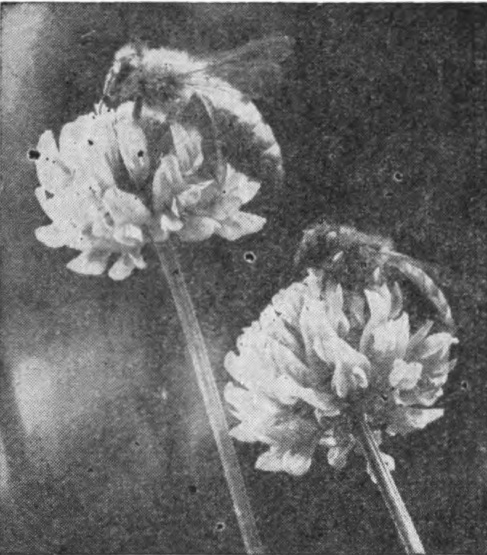 CLEMATIS (Clematis virginiana and spp.) Woody vines with 3-parted leaves and numerous flowers with many stamens and pistils, petals absent but the five sepals resembling petals, and fruits with long, plumed styles. Range from Nova Scotia to Georgia and Kansas, other species in the west. In Rhode Island, clematis produces a sparkling golden-colored honey with the fragrance of the flowers, according to A. C. Miller (J. H. Lovell, 1926). It is also valuable in Oregon.

CLOVER, PELLETT (Trifolium ambiguum) is a new variety introduced from the Caucasus in 1941 and popularized by the late Frank Pellett. It has a longer root system and a longer life than most clovers. The white heads are larger than those of white clover. In some localities bees work the heads freely, in others very little.