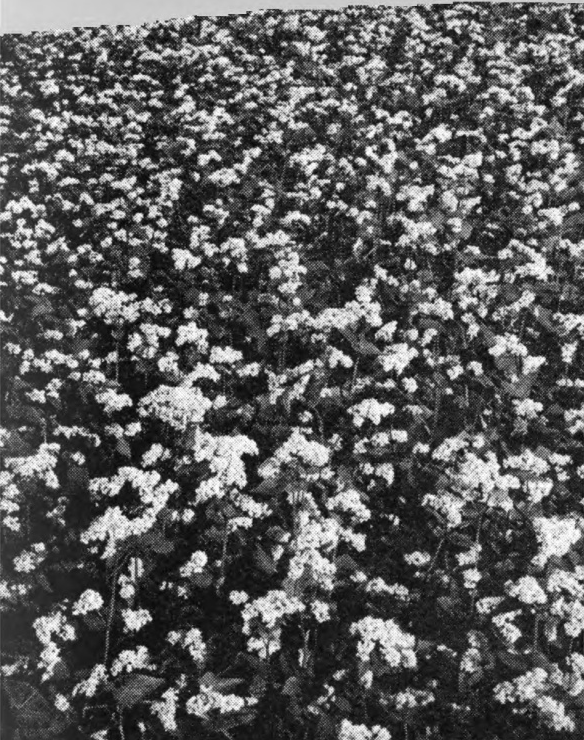 honey is used in baking ceremonial cakes by the Hebrews. Surpluses of 50 to 150 pounds are usual with occasionally a much larger one obtained. Buckwheat is not being planted as much as formerly. It yields nectar only in the morning and bees often become very cross in the afternoon when the flow ceases.

BUCKWHEAT, WILD (Eriogonum fasciculatum). Also called FLAT-TOP. A tall herb with flat-topped clusters of small white flowers, chiefly of value in California but it or related species occur east to Florida. The honey is light amber with a fairly strong but pleasant flavor. In the eighties great yields were obtained and wild buckwheat is still considered the third most important species in California although cultivation has greatly reduced it. A related species (E. niveum) yields a light-colored honey in Oregon.

BUTTONBUSH, BUTTONWILLOW (Cephalanthus occidentalis). A shrub 4 to 10 feet tall with simple paired leaves growing in wet places producing perfectly round clusters of white, tubular flowers. It yields nectar freely and produces a white or light amber honey with a good flavor but it is generally mixed with other kinds. Small surpluses have been reported in Vermont and Indiana and other northern states. Roy Cory reported that in Indiana a super of honey may be made from adjacent creek bottoms (A.B.J. Sept., 1946).

C A J E P U T-TREE, PUNK-TREE (Melaleuca Leucadendra). A tree introduced from Australia with thick, spongy bark and long clusters of white flowers shaped like a bottle brush. Cajeput blooms in the fall and winter in southern Florida. The honey is amber with a strong flavor and unpleasant odor. It ruins orange honey if mixed with it and the Florida Honey Cooperative has started a campaign to eradicate the tree in the vicinity of orange orchards. Jay Smith, Fort Myers, wrote that he sometimes obtained surpluses up to 55 pounds but adds, “The vilest honey we ever had.”

CAMPANILLA, WHITE (Ipomoea sidaefolia). Perennial vines, resembling our morning glory. They grow on fences, trees, and similar supports in the West Indies. Campanilla is considered the most valuable honey plant in Cuba where it produces a pearly white comb and white, fine-flavored honey. There is also a pink Campanilla (I. triloba).

CARROT, WILD and CULTIVATED (Daucus Carota). Herbs with white, flat clusters (in compound umbels) of tiny flowers with a few purple flowers in the center, finely divided compound leaves, and clusters of fruits resembling birds’ nests. There are only a few reports of bees working wild carrot. The honey is usually described as white with a mild flavor but it is rarely obtained pure. Cultivated carrots grown for seed have been reported to produce a surplus in California.

CASCARA SAGRADA (Rhamnus Purshiana). A small, deciduous tree with cream-colored flowers in axillary umbels and simple leaves tufted at the tips of the branches. Range from Washington to California. A small surplus of very dark thick honey difficult to extract is sometimes obtained, which is slightly laxative. The pleasing flavor and aroma make this honey popular with customers who quickly acquire the taste for it.