mer until October. The honey is light amber with a good flavor. E. V. Stansbury, Runnels, Iowa, obtains large surpluses of anise hyssop honey from a several acre patch which he has developed from seed. After careful observation, he has concluded that his bees visit no other flowers while this species is in bloom. Giant catnip (Agastache nepetoides) common in the northeastern states is much visited by honeybees.

BLUE CURLS, CAMPHOR WEED, VINEGAR WEED (Trichostema lanceolatum). A strong-scented herb, 5 to 15 inches tall with irregular blue flowers and long curved stamens protruding like a hook. Range from Oregon to southern California. In late summer it yields as much as 100 pounds of white, mild honey of good quality. It springs up in grain fields after cutting and in other waste places. It does best in dry weather.

BLUE THISTLE, BUGLOSS, BLUEWEED (Echium vulgare). Perennial, bristly herbs, 2 to 3 feet tall with spikes of blue flowers several inches long. Naturalized from Europe, now established from New Brunswick to Nebraska, south to Georgia and Kentucky, a bad weed in pastures and old fields. Bugloss produces a water-white honey with a good flavor. Walter Barth reports surpluses up to 100 pounds in northern New York. It has been reported as valuable in Maryland and Virginia.

BORAGE (Borago officinalis). Coarse, hairy annuals up to 2 feet tall with blue flowers in loose clusters, the corolla wheel-shaped and wide open. An introduced plant much planted in America. J. E. Johnson, Verona, Mo., considers borage the best annual to plant for bees and puts it in rows between his potatoes. Pammel (1930) states that in Iowa, “This is one of the best of our honey plants.” Although often praised there seems no record of a surplus in the United States. The honey is believed to be very dark.

BURDOCK (Arctium spp.). A purple-flowered herb with large leaves and bristly fruit, often an obnoxious weed. Bees visit the flowers freely for nectar but no surplus has been reported.

BUSH MINT, PURPLE-FLOWERED MINT (Hyptis mutabilis). A tall, bushy mint with spikes of 2-lipped, purple flowers. It blooms from March to November and is locally valuable in parts of Florida. The honey is reported to be amber with a strong flavor. The plants grow all summer and become very large by fall.

CANADA THISTLE (Cirsium arvense). Perennial herbs, the leaves sessile with prickly teeth, flowers purple in small dense heads, the floral bracts also prickly. Distribution from southern Canada to Virginia, Nebraska, and Utah in waste places, old fields and roadsides. The honey is white with a fine flavor. Canada thistle blooms from June to September. According to H. A. Scullen there are 50,000 acres of thistle in Oregon. In southern Florida, Nuttall’s thistle (Cirsium Nuttallii) sometimes produces a small surplus of white honey. 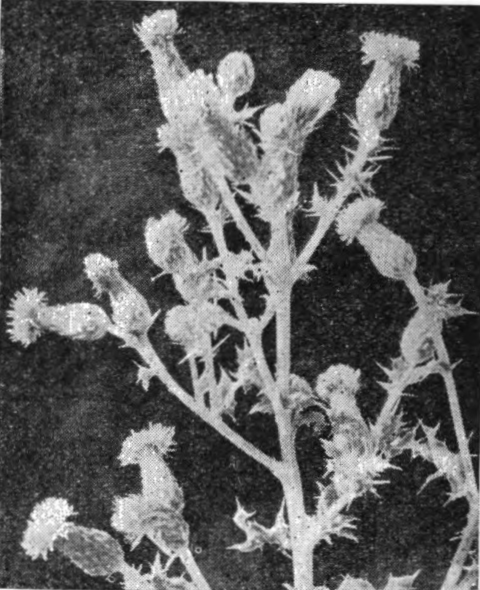 CHICORY, BLUE SAILOR (Cichorium Intybus). A low herb with a cluster of irregularly-toothed basal leaves, branching stems and composite blue flowers which close in the afternoon. It has a long blooming period in the summer over most of the United States and Canada. The roots are widely used as an adulterant of coffee. The honey is yellow with a bitter flavor