Chicory is listed as a minor honey plant in several sta'es.

DEAD-NETTLE, HENBIT (Lamium purpureum). A tiny weed with 2-lipped, purple flowers in axillary whorls and stalked leaves with crenate margins. Dead-nettle is common on lawns, cultivated fields and waste land in early spring in eastern United States. Bees collecting the nectar get their heads covered with the orange pollen. This little mint is an important aid to spring build-up.

FALSE INDIGO, CAT-WILLOW, RIVER-LOCUST (Amorpha fruricosa). Aromatic shrubs up to 15 feet tall with 9 to 25 leaflets and purple flowers in long spikes containing 50 or more flowers, each with only a single petal, an unusual legume with tiny pods a little longer than the calyx. False indigo grows from Pennsylvania and Saskatchewan south to northern Florida and Arizona in rich soils especially along river banks. It is valuable in Nebraska and Kansas and along the Ohio River.

FIDDLENECK, PHACELIA (Phacelia tanacetifolia). Low herbs up to 15 or 18 inches with deeply-cleft leaves and clusters of wheel-shaped, blue flowers which uncoil as they bloom. Widely planted and escaped especially in the southwest. In California small surpluses of a pale-green honey with a good flavor have been obained. According to Vansell carloads of honey were obtained in Ventura County, California, in 1908 from caterpillar phacelia. It is also valuable in New Mexico. In Kentucky, Pursh’s phacelia (P. Purshii) is heavily worked by bees.

FILARIA, FILAREE, ALFILERILLA (Erodium cicutarium). Annual, tufted herbs with compound, deeply incised leaflets, the rose-purple flowers in clusters of 5 to 12, and fruits slender with a very long beak. A European weed especially common in the southwest, where it blooms in late winter and early spring. Filaree is chiefly of value for pollen and the nectar for spring stimulation.

FOG-FRUIT, CARPET GRASS (Lippia spp.). A low herb with small clusters of tiny blue flowers. It occurs in the southern states and in California. According to Richter, fog fruit, is the principal source of nectar in parts of southern California. Carpet Grass (L. repens) is used as a lawn cover in the same state. Other species cover the shoulders of roads in the southeast. The honey is extra-light amber with a mild flavor.

FORGET-ME-NOT (Myosotis spp.). Low, hairy herbs with wheel-shaped, blue flowers often planted for ornament, but several native species occur in various parts of North America. Forget-me-nots bloom in spring and early summer and are said to produce a light-amber honey with a thin body. M. macrosperma is reported to yield a thin-bodied honey with the aroma of the blossoms in Oregon. 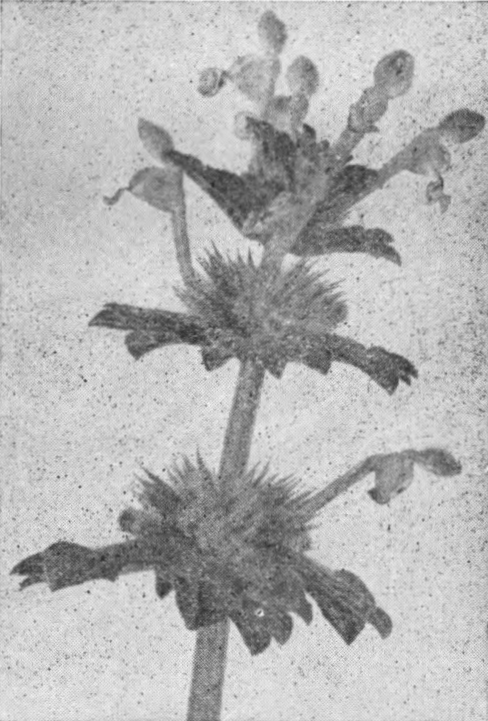