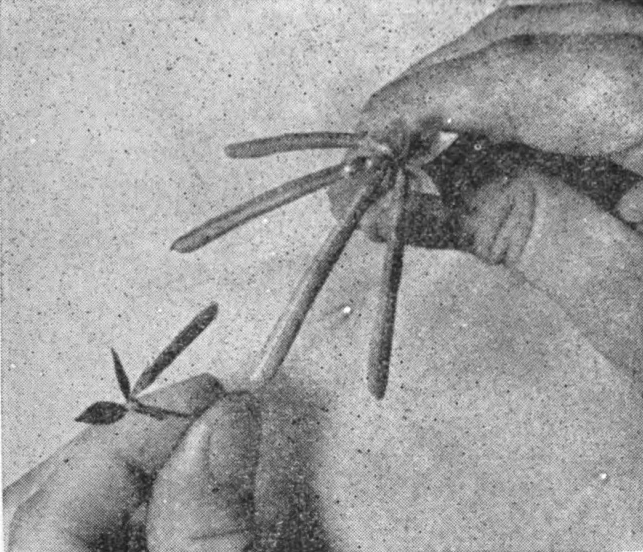 posite heads several inches across, the disk flowers brown and the large rays yellow. The more than 20 species occur in all states and Canada. The honey is yellow amber, with a strong flavor. Surpluses are most often reported from Canada and Florida. Sunflowers are fall bloomers.

SWEET CLOVER, YELLOW (Melilotus officinalis). The yellow flowered species blooms 10 days to 2 weeks before the white and their honey is usually inseparably mixed. The honey from the yellow averages slightly darker but not enough to affect its quality. The sweet clover season is extended by the variation in the time of blooming. (See WHITE SWEET CLOVER.)

TARWEED (Hemizonia fasciculata). Annual herbs 1 to 2 feet tall with branched stems and dense clusters of small yellow composite heads with both disk and ray flowers. Tarweed occurs on the mountain ranges of the southwest and coastal area of California where it blooms in June and July and produces a strong amber honey. The plants are covered with a tar-like coating which has a penetrating odor.

TORNILLO, SCREWBEAN (Prosopis pubescens) is a close relative of mesquite but has the pods coiled like a corkscrew. It grows from west Texas to southern California. It produces a light-colored honey with a good flavor.

TREFOIL, BIRD’S-FOOT (Lotus corniculatus). This legume has 5 leaflets, the basal pair much smaller, and yellow pea-shaped flowers usually with a red spot on the upper petal. It has been extensively planted in New York, Vermont, and other eastern states where it has spread freely. It yields a white honey with a heavy body and a fine flavor resembling clover. It blooms from June to August. According to Charles Mraz, in a good season in Vermont the flow from bird’s-foot is terrific and as much as a 100-pound surplus has been obtained by him. Keith Faulkner of Plymouth, Ind., reports an enormous crop of honey from trefoil. In Wisconsin Thor K. Berg obtained a 90-pound average from 25 hives from 7.5 acres of this legume.

TULIP-TREE, TULIP-POPLAR, YELLOW POPLAR (Liriodendron Tulipifera). A tall tree up to 200 feet with broad, nearly square leaves and large greenish-yellow flowers, orange on inside. It blooms in May and produces large quantities of dark red honey with a distinctive, pleasant flavor. It is listed as the best honey plant in Delaware, Georgia, North and South Carolina and second best in Tennessee, Virginia, Maryland, and Alabama. Surpluses up to 80 pounds have been reported with strong hives storing 200 pounds. In spite of its dark color, the