grow throughout the United States and most of Canada. The honey is yellow with a bitter taste and strong odor, and is used for brood rearing just before the clover flow. According to G. Perigo, this herb is important in southern Indiana, and Oertel considers it valuable in Louisiana.

RETAMA, HORSEBEAN (Parkinsonia aculeata). Shrubs or small trees with thorny green branches, and pinnately compound leaves with tiny leaflets that soon fall. The yellow, peashaped flowers are in long drooping racemes. Retama grows from Texas to California and produces an amber honey with a fair flavor, but surpluses are rarely obtained. It blooms rather irregularly through most of the summer.

ROSINWEED, GUMWEED, TAR-WEED (Grindelia squarrosa). Perennial herbs with sessile, spiny-toothed leaves and yellow composite heads one inch across with both ray and disk flowers. They grow from Minnesota and Manitoba south to Texas and Arizona, in sandy, semi-arid regions. They bloom in August and September. The buds are covered with a gummy secretion. The honey is yellow with a poor flavor and crystallizes quickly, but surpluses are small and are generally left for winter stores. Oertel listed it as valuable in 12 states.

SASSAFRAS (Sassafras albidum). Small trees with aromatic bark and clusters of pale yellowish flowers in early spring; the leaves of 3 shapes, plain, 2-lobed, and 3-lobed. Sassafras occurs from Maine to Michigan south to Florida and Texas. The flowers secrete nectar freely and are visited freely by bees but the honey is used in brood rearing.

SIBERIAN PEATREE (Caragana arborescens). Shrubs or small trees 10 to 20 feet tall with pinnately compound leaves of 8 to 12 leaflets and yellow, pea-shaped flowers in clusters of 2 to 4, and numerous pods. Peatree has been introduced from Asia and extensively planted in central Canada and northern United States, where it has escaped. It blooms about the middle of May to late June. It has grown luxuriantly at the government farm in Manitoba and is considered a valuable addition to the honey flora.

SOTOL (Dasylirion texanum). From basal rosettes of leaves up to three feet long with spiny margins arise flowering stalks up to 20 feet tall with hundreds of straw-colored catkinlike clusters. Sotol occurs from central Texas west to Arizona and south into Mexico. The honey is a dirty yellow color with a strong flavor but rarely obtained pure in the United States. Ordetx says that they are of “unsurpassed value for the Mexican apiculturist.”

SOW-THISTLE (Sonchrus arvensis). Perennial composites with deeply cleft, spiny leaves and bright-yellow flowers, introduced from Europe and now have become bad weeds especially in the grain fields of central Canada. The honey is amber with a greenish tinge. Sow thistle is listed as an important honey plant in Manitoba and Saskatchewan where wheat fields are usually yellow with the bloom. Weed sprays are reducing this weed to the point that it is less valuable to the beekeeper. 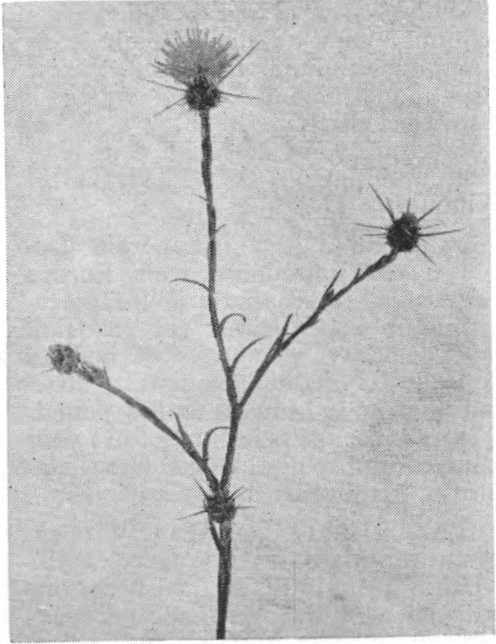