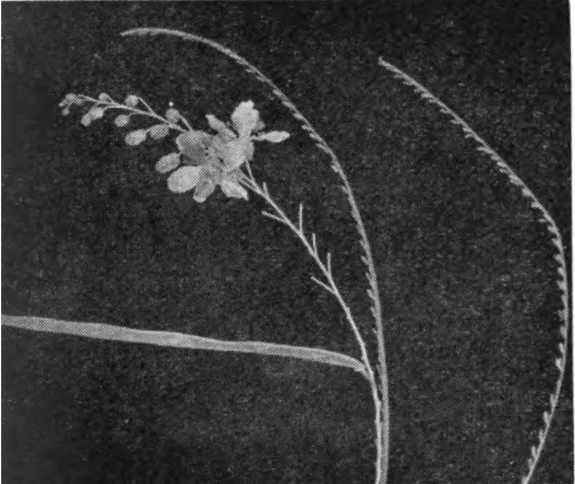 sensitive to touch, and large yellow flowers with a purple spot at the base of each petal. The flowers are sometimes visited for their abundant pollen but have no nectaries. However, a large cup-shaped gland on the petiole of each leaf secretes extra-floral nectar. In central Florida up to 100 pounds of a light-colored, thin-bodied honey with a poor flavor is sometimes obtained. Partridge-pea is common in many southern states and surpluses have been reported from Georgia, Louisiana, Texas, and even as far north as Missouri.

PEANUT (Arachis hypogaea). A legume much planted in the south. There have been two reports of peanut honey but most beekeepers in the vicinity of large fields insist that their bees rarely if ever visit the conspicuous yellow flowers.

POISONWOOD (Metopium toxiferum). Small trees up to 45 feet tall with 3 to 7 leaflets and branched clusters of yellow-green flowers. They are found only in the southern third of Florida where surpluses of light-amber honey of good flavor are obtained. One season O. O. Poppleton at Stewart, Fla., stored 28,000 pounds of poisonwood honey mixed with manchineel and other tropical species.

POPPY, CALIFORNIA (Eschscholtzia califomica). Low herbs one to two feet tall with feathery leaves and large yellow, pink or orange flowers with great masses of stamens. In the southwest this poppy blooms in early spring covering the land for miles with a solid mass of bloom. Vansell reports that bees collect much pollen but little if any nectar. The flowers are generally considered nectarless, although some beekeepers insist their bees get some honey from California poppy. In any case the numerous stamens produce all the pollen the bees can use.

PRICKLY ASH (Xanthoxylum americanum). Aromatic shrubs with sharp prickles and pinnately compound leaves with 5 to 9 leaflets and yellowish flowers in umbels in axils of leaves. Prickly ash is found from Canada south to Georgia and Oklahoma. It produces a bitter honey which will ruin other honeys but luckily it is usually consumed in brood rearing. In Texas a related species called Colima (X. pterota) sometimes yields a small surplus according to C. B. Bryson.

PRICKLY PEAR (Opuntia spp.) is a very common species of cactus in the southwest although one species occurs as far north as Massachusetts and Manitoba. It is chiefly valuable for pollen but a small amount of reddish amber honey with a fair flavor is sometimes stored. Bees sometimes collect the red juices of the fruit making bright red spots in the combs.

PRIMROSE-WILLOW (Jussiaea decurrens). A creeping herb with winged stems, rooting at the nodes with large, bright-yellow four-petaled flowers one inch broad. It is found from Kentucky to Kansas south to the Gulf in swamps, bogs and other wet places where it blooms from June to August. Oertel considers it important to bees in Louisiana and everywhere it is heavily worked for nectar.

RABBITBUSH, RAYLESS GOLDENROD (Chrysothamnus spp.). Shrubby plants with slender whitish leaves and large clusters of composite heads, yellow while in bloom but later having a white-tufted appearance. It blooms in late summer throughout the western states. The honey is amber with a nauseating taste and disagreeable odor and is left for winter stores. There are at least 18 species.