WHITEBRUSH, BEEBRUSH (Aloysia ligustrina). A shrub up to 8 feet with long spikes of tiny, tubular, white flowers found in the arid southwest especially in west Texas where it forms great thickets. The honey is white with a heavy body, mild flavor and a delicate fragrance. Howard Hatch of Marathon wrote that his largest surplus was 300 pounds with an average of 40 pounds. Whitebrush blooms 9 days after a rain.

YELLOWWOOD (Cladrastis lutea). Trees up to 50 feet, leaves with 7 to 11 leaflets and pea-shaped white flowers in long pendant clusters. Range from North Carolina and southern Illinois south to northern Georgia and Alabama. The honey is light-colored with a strong distinctive flavor, but rarely obtained in surplus amounts.

YERBA SANTA, MOUNTAIN BALM (Eriodictyon californicum). An aromatic shrub, 3 to 9 feet tall, with shiny leaves hairy beneath and branched clusters of white or pale blue flowers with funnel-shaped corollas. In central and northern California on mountain slopes it yields in early summer a small surplus of amber honey with a spicy flavor. It is also valuable in parts of Utah.

YUCCA, SPANISH BAYONET, SPANISH DAGGER (Yucca spp.). Stemless plants with large clusters of leaves (or with short, thick stems) and great compound clusters of whitish or creamy-white flowers several feet long. Yuccas are particularly common in the southwestern arid areas where they are often the dominant species. According to Natt N. Dodge only Our-Lord’s-Candle (Y. Whipplei) is of much value for nectar in southern California. In Texas yucca is sometimes visited for pollen and possibly for nectar when there is nothing else available. 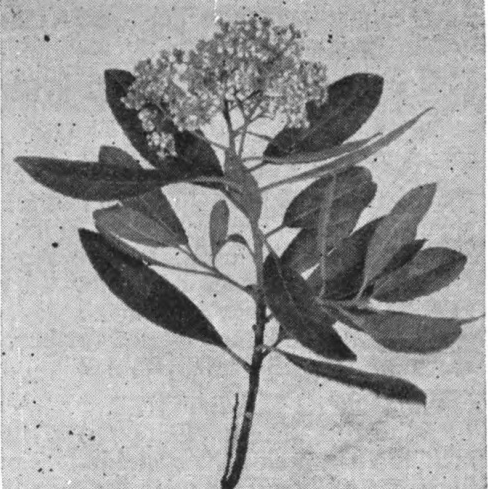 BEE BEE TREE (Evodia Daniellii). A moderate-sized tree with pinnately compound leaves resembling those of the ash, and great compound clusters of small, white flowers, followed by pods containing small, black seeds. It blooms in late July and early August at the Morris Arboretum in Philadelphia where honey bees swarm over the tree, 20 or more excited bees on each flower cluster. Fred W. Schwoebel, curator of the Langstroth Bee Garden has distributed either the seed or small seedlings to hundreds of beekeepers all over the country, most of whom report good germination. As the tree grows very rapidly and blooms in 8 years or less, it should soon become of considerable importance (Gleanings in Bee Culture, Nov. 1955).