best honey plants in the United States today. Oertel placed them number one in 14 states and second in 6 states. They are very important in at least 10 more states. Sweet clover is particularly valuable in the central and mid-western states. A single hive in Colorado stored 500 pounds. In Kansas an average surplus of 200 pounds is reported. In Minnesota surpluses as high as 300-400 pounds per colony in a good year are obtained by R. J. Wood. One colony on scales at Fargo, North Dakota produced 600 pounds in 3 weeks. Hubam or annual sweet clover is now widely planted and is very valuable as a honey plant.

SWEET PEPPERBUSH, WHITE ALDER (Clethra alnifolia and spp.). Shrubs 4 to 10 feet tall with long clusters of white, fragrant flowers blooming from July to September. Great fields of sweet pepperbush grow along the coast of Massachusetts where it is of major importance. The honey is white tinged with yellow, mild flavored with the odor of the bloom. The combs are very white. A southern species (C. tomentosa) is valuable from North Carolina to Georgia.

TITI, SPRING (Cliftonia monophylla). Also called BUCKWHEAT TREE from the shape of the fruits. Evergreen trees up to 30 feet with lateral clusters of white flowers and winged fruits. Range from southern Virginia to Florida and Texas, in acid swamps along the coast. The light amber honey has a strong flavor. Yields up to 60 pounds with an average of 20 are obtained in early spring, but most of the honey is used in spring build-up.

TITI, SUMMER Cyrilla racemiflora). Shrubs or small trees up to 30 feet with slender, oval leaves, and elongated clusters of white flowers. Range from Florida to Texas north to Virginia and Missouri chiefly in swamps. The honey is said to be amber with a strong flavor. The honey causes the disease known as purple brood according to a number of beekeepers including Robert Foster. Mr. Merrill of State Line, Mississippi, believes the honey kills brood only if not properly ripened. A. V. Dowling doubts this and believes purple brood is due to the collection of fruit juices from rotten berries. 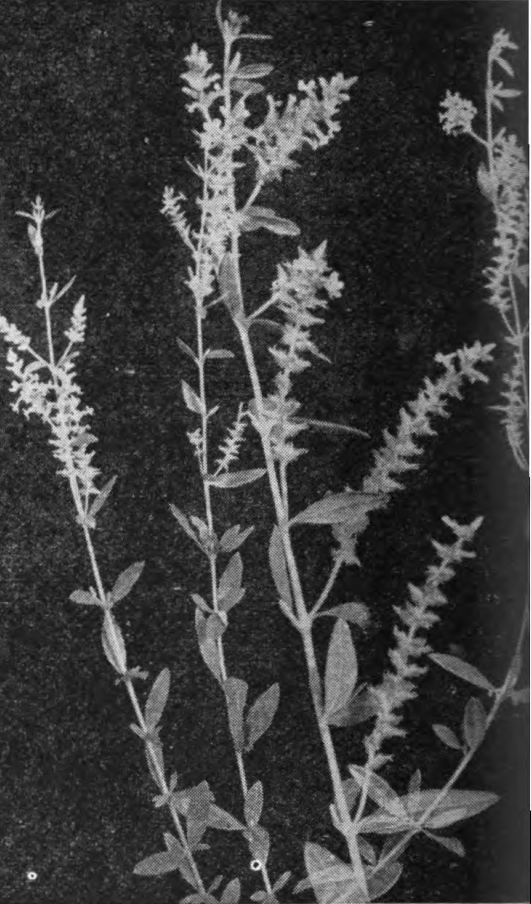 TOYON, CALIFORNIA HOLLY (Photinia arbutifolia). Evergreen shrubs up to 25 feet tall with large irregular clusters of white flowers, and red berries, found on coastal ranges of California up to 3500 feet. Toyon produces an amber honey with a decided flavor that is locally popular. Clarence Wenner reports that he harvests from 30 to 100 pounds which he sells to bakers. It is more reliable in the coast foothills than in the Sierras.

V I B U R N U M (Viburnum spp.) Among the common names are WILD RAISIN, WITHEROD, NANNYBERRY, ARROWWOOD, HIGHBUSH CRANBERRY, BLACK HAW, and SHEEPBERRY. Shrubs with large flat-topped clusters of small white flowers common in Canada and most of United States. Although often listed as honey plants, surpluses are very