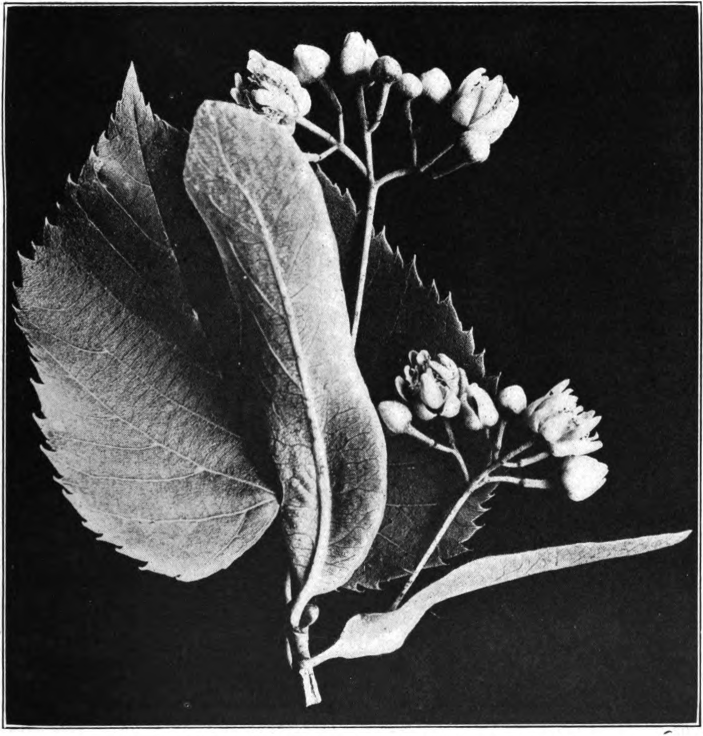 the leaves are smooth above and silvery white beneath. The European linden (T. europea) is widely cultivated in this country as an ornamental tree. Other vernacular names are linden, lime tree, bee tree, whitewood, and whistlewood. (Fig. 21.)

The clusters of from six to fifteen flowers are drooping, and are protected from the rain by the broad leaves. The stem of the cluster is adnate to an oblong membranous bract. The nectar is secreted and held in the fleshy sepals; and it is often so abundant that it appears like dewdrops in the sunlight. The blossoms are small, light greenish yellow, and exhale a honeylike fragrance. The stamens are numerous, and the anthers contain a small amount of pollen; but honeybees seldom gather it when the nectar is abundant. If, however, the nectar supply is scanty, then both honeybees and bumblebees may be seen with balls of pollen on their thighs. In England basswood seldom sets seed.

BEAN (Phaseolus vulgaris). — Both the pole and the bush varieties of the common garden bean are bumblebee-flowers; but, as they yield very little nectar, they are only occasionally visited by bumblebees. They are thus largely dependent on self-fertilization for the production of seed. Honeybees are not able to depress the keel. Bumblebees sometimes make holes in the flowers of the scarlet runner (P. multiflorus), and honeybees then in large numbers rob them of nectar. Lima bean