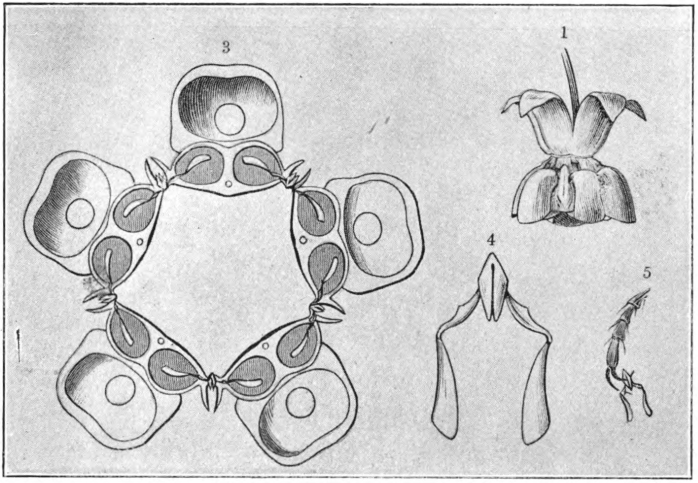 Fig. 85. — Clip mechanism of milkweed flower. 1. Flower of common milkweed (Asclepias syriaca) seen from the side. 3. Transverse section through the flower (enlarged). 4. Corpusculum (clip) with two pollinia (enlarged). 5. Foot of an insect with pollinia fastened to it by the clip. (After Kerner.)

it. Exposed to the air, the strap-like stalks dry and draw the pollinia close together. As the bee alights on another flower, they are easily thrust between two anther wings, where they come in contact with the stigma; but, once inserted and pulled upward, they can not again be withdrawn. The insect can obtain its liberty only by breaking the connecting bands. If it can not do this, it perishes slowly of starvation. Disc after disc may thus become attached to an insect, until it is crippled or helpless. (Fig. 85.)

One season an English beekeeper lost thousands of his bees from the effects of strings of these clips, but in America not much loss has been reported. Bees thus afflicted are sometimes expelled from the hive. Not a season passes that inquiries are not received from beekeepers requesting information in regard to these peculiar appendages; and many different explanations of them have been given by persons not familiar with the flowers of the milkweed. Some regard them as a fungus, others as a protuberance growing on the bee’s leg, and still others as a winged insect-enemy of the bee. The dry membranes are often described as sticky or glutinous glands, but this is never the case.

MISTLETOE (Phoradendron flaveseens). — A leafy yellowish-green shrub parasitic on deciduous-leaved trees, as the red maple, tupelo, oak, apple, mesquite, and elm. The small greenish flowers are sunk in the joints of the short, jointed spikes. The stamens and pistils are in different flowers, which are borne on different plants. The flowers have an orange odor, and nectar is secreted by a nectary which forms a ring at the base of the calyx on the inner side. Both kinds of flowers secrete nectar; but the pistillate yield the greater amount and are sometimes filled to the tips of the calyx lobes. Under certain conditions the flowers are nectarless. There are only three anthers, which produce a small amount of pollen which is thickly beset with short spines. The tongue of a bee probing for nectar becomes covered with pollen, which is carried away to another flower. The insects active in pollination are flies and bees. In Texas mistletoe blooms in February and March