of northern Michigan. On the other hand, milkweed is annually increasing in abundance, and bee culture here is likely to be largely dependent on it in the future. Swamp milkweed (A. incarnata) is abundant in swamps throughout the northern states and extends southward to Tennessee and Louisiana. It yields a large amount of honey. In California two species of milkweed (A. mexicana and A. speciosa) are of immense value.

The common milkweed, or silkweed, is a stout plant with milky juice, 3 to 5 feet tall, with oblong opposite leaves, which are very hairy beneath but smooth above. The small brown-purple flowers are in terminal or lateral clusters, called 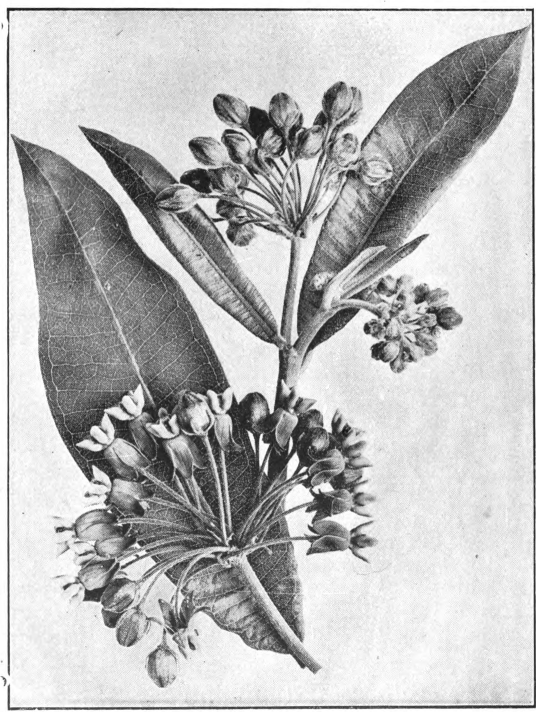 umbels. Their structure is very intricate, rivalling that of the orchids. The fruit is a pair of pods containing many flat seeds, tipped with tufts of long silky hair or down. (Fig. 84.)

Milkweed flowers are called pinch-trap flowers because they possess a remarkable clip-mechanism found in no other family of plants. Two club-shaped masses of pollen are attached by flexible bands to a small, dry, triangular disc placed midway between them. In this membraneous disc there is a wedge-shaped slit at one end. In its efforts to obtain a foothold on the smooth flowers an insect is likely to thrust a claw, leg, antenna, or tongue into one of the slits. If one of these organs is drawn upward in the slit, the dry disc becomes tightly clamped to it. When the