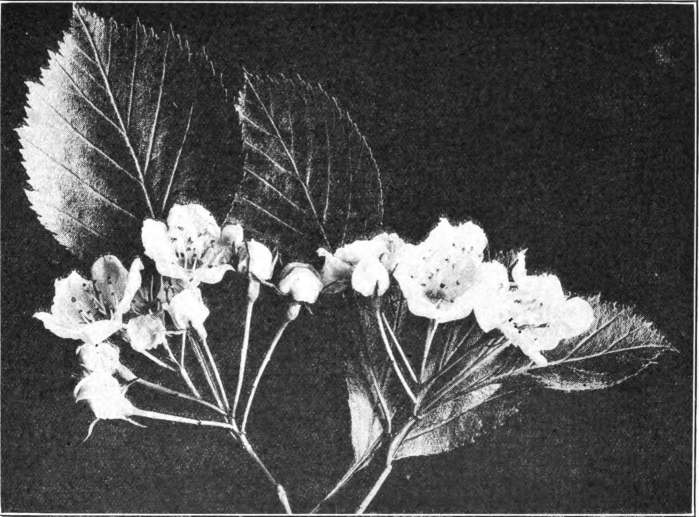 and Missouri the bees gather from it a large amount of nectar in certain years. In Texas, granjeno, or Mormisia pallida (Celtis pallida), a thorny shrub 6 to 12 feet tall, growing in sandy soil, is considered a good honey plant.

HAWTHORN (Crataegus). — Thorny shrubs, or small trees, very common in the limestone regions of eastern North America. The seventh edition of Gray’s Manual recognizes 65 species in the New England states. The white or pinkish flowers are in corymbs, and are very conspicuous. Owing to the disagreeable odor of the bloom it is visited by many flies. Honeybees and many solitary bees have been seen sucking nectar and collecting pollen. The young shoots sometimes exude a sweet sap which is sought by insects. There are also extra-floral nectaries. Common in woodlands. May and June. C. oxyacantha, introduced into Australia as a hedge plant, yields a white delicately flavored honey. (Fig. 62.)

HEARTSEASE (Polygonum Persicaria). — This is one of a large family of nectar-bearing plants, the most important of which is the common buckwheat. Heartsease, sometimes known as lady’s thumb, knotweed, or heartweed, is naturalized from Europe, and widely distributed over eastern and central North America, particularly in Illinois, Kansas, and Nebraska. In the last-named state it reaches a height of from three to five feet, and grows luxuriantly on all waste and stubble lands. The flowers, in oblong clusters, are generally reddish purple, and, in rare instances, white. It yields in Nebraska, and other states in that section of the country, immense quantities of honey. At a convention held at Lincoln, Nebraska, a beekeeper reported that two of his colonies yielded each 450 pounds of extracted honey, and that the average for his entire apiary was 250 pounds per colony — all heartsease. While these yields may have been exceptionally large, a number of other beekeepers reported at the same convention an average of 200 pounds from the same source. There are in Nebraska acres upon acres of this honey plant extending over the plains as far as the eye can reach; and as it yields nectar from August until frost, enormous yields excite no surprise. (Fig. 63.)