John, Quebec, an average colony yield of 200 pounds is obtained from alsike and white clover. In Minnesota, Wisconsin, and Michigan white clover is a very reliable honey plant. A beekeeper in Fillmore County, Minn., writes that a complete failure of white clover has not been known in, that locality in 20 years. In Wisconsin, Michigan, and in St. Lawrence and Jefferson counties, New York, it is also usually dependable, yielding from a medium to a large crop of honey. But farther southward in Illinois many beekeepers report that a full crop is obtained only one year in three. In Maury County, Tennessee, in 1913, 500 colonies in one apiary could not have gathered all the nectar available; but since that year not more than one-fourth of a crop has been obtained. Although abundant in portions of Mississippi and Louisiana, it yields much less bountifully than in northern regions. In general, assuming that the soil and rainfall are suitable, in localities where the mean annual temperature does not exceed 44 to 50 degrees F., white clover is reliable nearly every year; but in warmer regions it is less dependable.

White clover is widely distributed throughout the northern portion of the United States, but is much less common in the southern states. In New England it is abundant on the limestone soils of Aroostook County, Maine, in the Champlain Valley, Vermont, and the Berkshire Valley, Massachusetts. There is an excellent white-clover belt on the calcareous glacial soils of St. Lawrence and Jefferson counties in northern New York; and from Buffalo nearly to the Hudson River there is a strip of land 20 to 50 miles wide, on which white clover is usually dependable. In the southeast comer of Pennsylvania the clovers thrive on a productive limestone soil in York, Lancaster, and Chester counties; while within the Appalachian Mountains are many fertile valleys with limestone floors where all the clovers flourish. (Fig. 45.)

White clover is at its maximum in “the white-clover belt,” which includes the states of Ohio, Indiana, Illinois, Michigan, Wisconsin, Minnesota, and Iowa. But it is not equally abundant in all parts of these states, nor are the limits of the belt strictly defined by their boundaries. The area covered by white clover in this section has been greatly reduced by the intensive cultivation of the cereals; and in districts where dairy farming is largely practiced, as in southern Wisconsin and 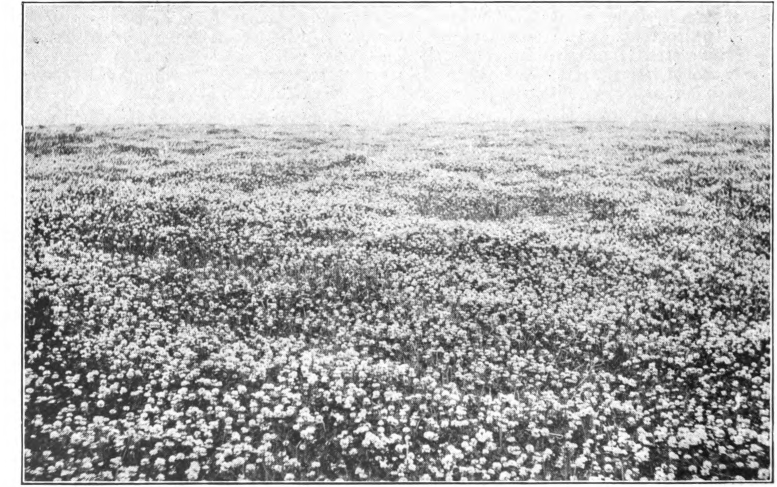