large nectaries, widely distributed in the south from Georgia to Texas north to Virginia and Kansas, growing in waste places. A beekeeper in Missouri reports that they are good honey plants. The foliage has a minty fragrance.

ELM (Ulmus spp.). Elm trees bloom either in the early spring or in the fall. The American elm (U. americana) is an early source of pollen, blooming in late winter or early spring whenever there are several warm days. Elm flowers are nectarless and the light, dry pollen is wind-blown.

EPHEDRA, JOINT FIR, BUCKU (Ephedra spp.). This gymnosperm with leafless green stems, much branched and greenish flowers in conelike clusters is common in the southwest from Texas to California, where it blooms from January to March in semi-desert areas. A strong, slightly greenish honey of poor quality has been reported

FIR, DOUGLAS (Pseudotsuga taxifolia). A tall forest tree native to the Pacific Coast from British Columbia to northern Mexico. From the ends of the needlelike leaves a sugar secretion is discharged under certain conditions which collects all over the tree and even falls to the ground. Fir sugar is found chiefly in British Columbia and northern Washington, in open woods where there is plenty of moisture in the ground. Bees collect the secretion and produce a honey which is considered desirable for table use but too resinous for winter stores.

GRANJENO, HACKBERRY (Celtis pallida). A shrub or small tree growing only 8 to 12 feet tall and forming large stands in southern Texas where it blooms after each rain. According to E. B. Ault, Granjeno produces an amber honey with a light body which sours easily. Hackberry belongs to a group of wind-pollinated trees generally described as nectarless.

GRASSES (Graminae). There are hundreds of species of grasses blooming during the summer. They are wind-pollinated and have no nectaries. Occasionally bees gather pollen from grasses, but the light, dry grains are hard for bees to handle. Bees sometimes collect sweet secretions from fungi, such as ergot, which grow on grasses. They have also been observed to suck the sap from the stubble of a newly cut field of wheat.

GRAPE(Vitis spp.). Grapes have tiny green flowers which are inconspicuous but the flowers have nectaries. Occasionally grapes yield a surplus of reddish honey with a good flavor. In Arkansas, Monta Sunkel reports a surplus of 10 to 15 pounds from muscadine grape (V. rotundifolia) but the honey sours easily.

HOP-TREE (Ptelea trifoliata). Shrubs or small trees up to 20 feet tall with three leaflets, compound clusters of small greenish-white flowers, followed by a round, flat, winged fruit with 2 seeds in the center. Hop-tree occurs from Quebec and southern Ontario south to Florida and Arizona along river banks and in rocky woods. It blooms in May and June. Bees visit the flowers freely for nectar which is secreted by a circular nectary around 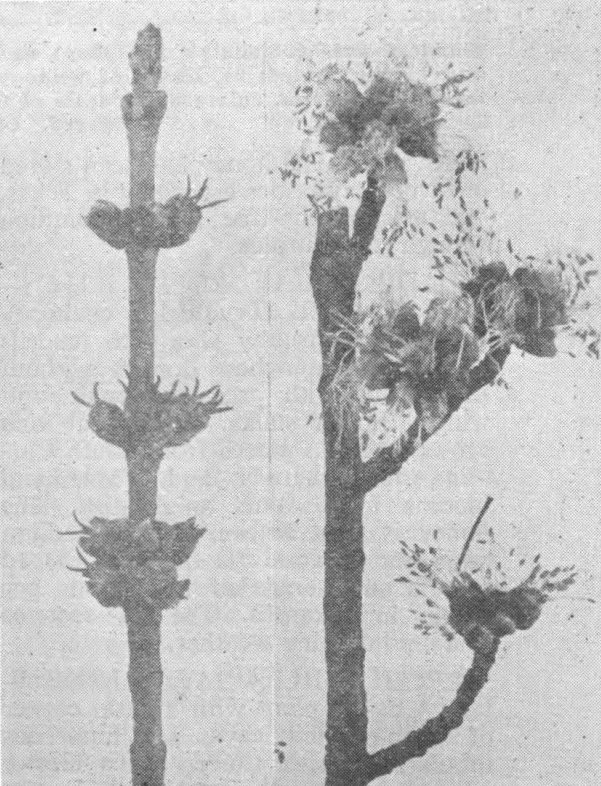