ALMOND (Prunus Amygdalus) This fruit tree is grown chiefly in California, Arizona, and Oregon. It blooms in early spring and is important as a stimulant to brood rearing. The honey is bitter. The flowers must be cross-pollinated by insects to set fruit.

ARROW-WEED (Pluchea sericea). Branched shrubs with pink to purple flowers growing in the southwest, California to Texas, and blooming in May. The honey is described as light amber of good quality by Vansell.

CHINA TREE, CHINA-BERRY (Melia Azedarach) is a small, much-branched tree with compound leaves much planted around homes in southeastern states. It produces large clusters of fragrant flowers in May and early June and the yellow berries persist all winter. Bees work the flowers eagerly but the honey is used chiefly in brood rearing.

CLOVER, ALSIKE (Trifolium hybridum). This clover is the most important honey plant in seven northeastern states according to E. Oertel, and is extremely important in southern Canada. The pinkish heads are borne on a branched, leafy stem. The delightfully mild honey is white to extra-light amber and the combs are white. Alsike clover has been widely planted as a cover crop and has become well established in the northern half of the United States. 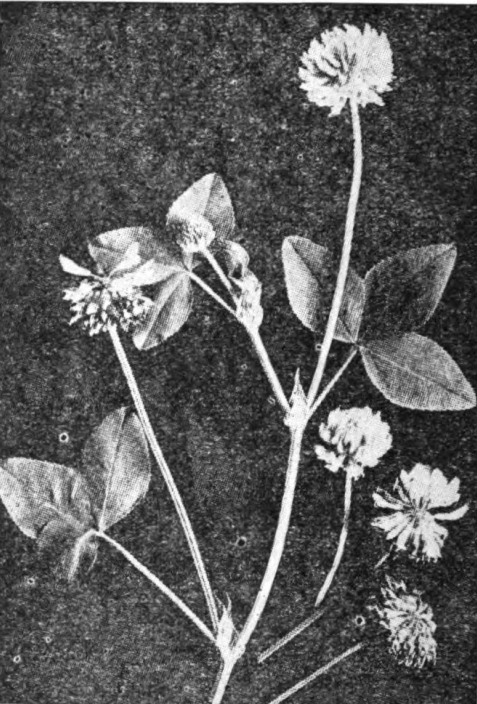 CLOVER, CRIMSON (Trifolium incarnatum) is extensively planted in many southern states. It blooms from April 15 to May 15 in Tennessee, where 65 per cent of all the seed is produced in the United States. Strong colonies stored up to 150 pounds of honey in a Tennessee apiary in 1949. The honey is extra light amber with a yellowish tinge with a good body and an excellent flavor.

CLOVER, RED (Trifolium pratense) has large heads of rose-purple flowers with tubes too long for honeybees to reach all the nectar. They do visit the flowers for pollen and when other plants are scarce they also get some nectar, especially later in the summer after the first cutting. The honey is light amber with a reddish tinge and a good flavor.

CORALBERRY, BUCKBRUSH (Symphoricarpos orbiculatus). This low, woody shrub forms dense thickets in hilly, rocky country. The small pinkish flowers secrete nectar abundantly in the middle of summer when other honey plants are scarce. The coral-red berries persist all winter. The honey is extra light amber to light amber with a good flavor and body. Surpluses up to 50 pounds are reported by Morris Black in Kentucky.