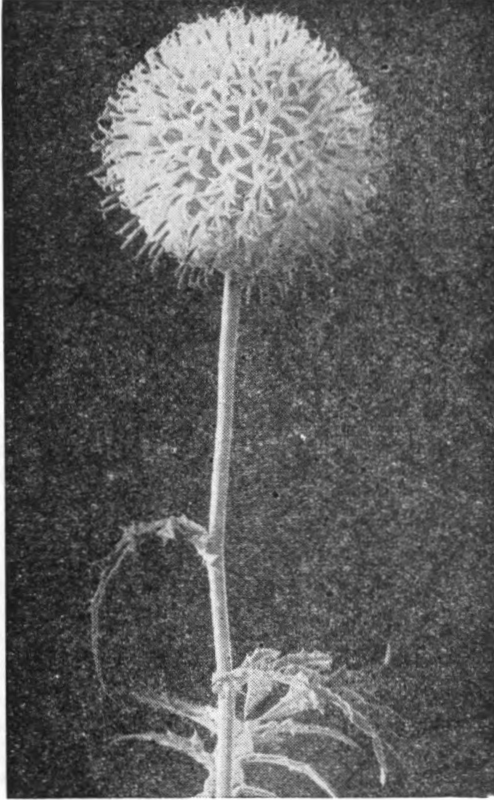 Texas. Senisa produces a light amber honey with a good flavor. It blooms in spring and after a rain.

SPEARMINT (M e n t h a spicata). Minty herbs with slender spikes of purple flowers closely clustered. Spearmint is established all over the United States in moist places and also cultivated for its oils used in flavoring. Peter Bau averages 30 pounds per colony of spearmint honey in northwestern Indiana where there is a large acreage. The honey is medium amber with a strong minty flavor.

TEASEL (Dipsacus sylvestris). Stout, coarse perennials, 2 to 4 feet tall with prickly stems and toothed, prickly leaves, and blue flowers in dense heads. Range Quebec south to North Carolina and Missouri in old fields and along the roadsides. It blooms in early summer and produces a white honey with a fair to good flavor. Fuller’s teasel was formerly cultivated in New York for the heads of stiff bristles used to raise the nap on woolen cloth. G. M. Doolittle made tons of honey from these fields of teasel.

THISTLE, GLOBE (Echinops sphaerocephalus). Also known as CHAPMAN’S HONEY PLANT. Stately herbs 4 to 6 feet tall, with spiny, toothed leaves and large, round heads of tubular, blue flowers. In 1886 Hiram Chapman planted 3 acres of globe thistle recently introduced from Europe and praised it highly but other beekeepers reported that it did not yield enough nectar to pay the cost of planting. The honey is probably white, but does not seem to have been obtained pure. It blooms in late summer.

THISTLE, PURPLE (Eryngium spp.). Perennial herbs, 1 to 3 feet tall, with spiny, deeply-lobed leaves and dense heads, round to oval in shape, of blue to blue-purple flowers. Range from eastern Kansas to Texas in dry soils where they bloom in July and August. The honey is amber of rather poor quality chiefly obtained on the coastal region of Texas. A species in California (E. articulatum) is listed as a fair honey plant.

THYME (Thymus Serpyllum). A tiny, shrubby, mint only 4 to 12 inches tall with purple flowers in short clusters at the ends of the branches. Thyme has become established in several eastern states where it blooms from July 25 to August 20 in the Catskill Region of New York, and slightly later in the Berkshire Hills of Massachusetts. The honey is amber with a strong minty flavor and odor. Surpluses of 50 to 75 pounds are often stored, and M. P. Traphagen reports one colony which stored 150 pounds.