CREOSOTE BUSH (Larrea tridentata). Evergreen shrubs 3 to 6 feet tall with sessile leaves double to base, bright yellow flowers and hairy, green fruit. Great stands of these bushes occur in the southwestern desert areas from western Texas to California. The foliage is very resinous and smells like creosote. The honey is described as bluish-yellow but is rarely obtained in surplus quantity. Creosote bush is chiefly of value to stimulate brood rearing.

CROTALARIA (Crotalaria striata and spp.). Herbs 3 to 5 feet tall with 3 leaflets, yellow pea-shaped flowers in long spikes, and beaked pods 2 inches long. Crotalaria is grown as a cover crop in South Carolina and central Florida and sometimes produces a light-amber honey with a strong flavor. David Dunavan of Clemson College reports a mild-flavored honey from a variety called Giant Striata in South Carolina.

CROWNBEARD, YELLOWTOP (Verbesina encelioides). This composite is occasionally of value in Texas where it blooms all winter in the Rio Grande Valley and again in the summer farther north. The honey is amber and very strong. According to A. H. Alex it is so repulsive that one can hardly swallow it.

CUCUMBER, CULTIVATED (Cucumis sativus). This much cultivated vegetable is entirely dependent upon insects for transferring the pollen from the male to the female flowers. The honey according to V. G. Milum is pale yellow amber, strong at first but later becoming mild. Only where large fields of cucumber are cultivated is any appreciable amount of honey obtained. Many colonies of bees are sold for use in pollinating cucumbers in greenhouses.

CUCUMBER, WILD (Sicyos angulatus). Also called SPINY or BUR CUCUMBER. An annual vine with angular stems, large leaves, branching tendrils, flowers pale yellowish, small, rotate, female in compact clusters producing fruits covered with spines, the male flowers in slender, elongated clusters. Range is Quebec and South Dakota, south to Florida and Texas in moist ground, especially along river banks. It blooms from June to late September. It is especially common along the Ohio River and its tributaries. In southern Indiana as much as 100 pounds of wild cucumber honey may be stored per colony. L. R. Stewart considers this his most important fall honey plant at Newport, Ind. The honey is light amber with a mild flavor. A closely related species of WILD CUCUMBER (Echinocystis lobata) with much the same range with greenish-white flowers is listed as a honey plant in the northeastern states. This species has large, inflated fruits with soft prickles.

DANDELION (Taraxacum officinale). This stemless composite is usually one of the first sources of nectar in the spring in many states. The honey is a deep yellow, has a strong often bitter taste and smells like the flowers. Parson Pile in Montana once stored 6000 pounds. Usually all the dandelion honey is used in early brood rearing and it is considered one of the most important spring stimulants for this purpose. It is also very important for pollen. 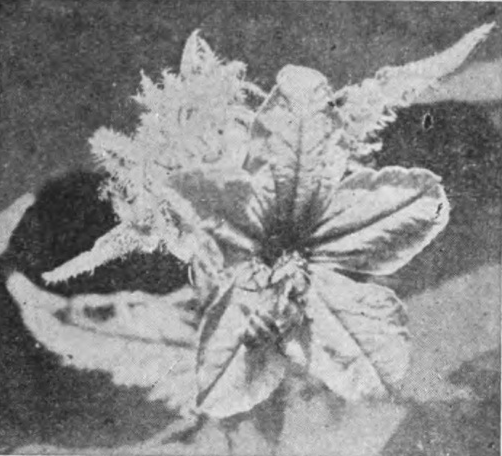