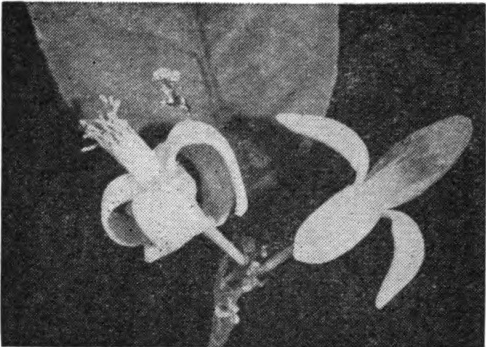 Colorado, and California in acid, rocky or sandy soils. In California there are hundreds of acres of manzanita which start blooming in January or February and continue into July or even August in the mountains. The honey is white to light amber with a good though slightly bitter flavor. As much as 200 pounds may be stored but the average is around 40 pounds.

MEADOWSWEET (Spiraea alba). A small shrub 3 to 5 feet tall with many small white flowers in pyramidal clusters. It is common in the northeastern states and often planted for ornament. Bees and other insects visit the flowers in great numbers but no surplus has been reported.

MEXICAN CLOVER, PURSLANE (Richardia scabra). A low annual herb with white, tubular flowers which has invaded cultivated land from the Carolinas and Florida west to Texas. It is often a bad weed. It blooms from July to frost. Bees work it in the morning until about 11:00 A.M. when the flowers close for the day. O. K. Anderson in Alabama obtains an average of 50 pounds per colony. The honey is light-amber with a thin body and a tart acid flavor. It may ferment.

MINER’S CANDLE (Oreocarya virgata). Tall slender herbs with elongated leafy flower clusters common on the slopes of the Rocky Mountains in Colorado and Wyoming in rocky soils. The honey is light-amber of poor quality. It is used chiefly in maintaining the bees through the summer.

MOUNTAIN MAHOGANY (Cercocarpus montanus). Shrubs 6 to 20 feet tall with evergreen leaves and white flowers with a tubular calyx but no petals. They occur from South Dakota and Montana south to west Texas and Utah on high mountains where they bloom in the spring. Mountain mahogany furnishes both pollen and honey.

ONION (Allium Cepa and spp.). The onion when extensively cultivated produces a white honey with a strong onion odor which gradually disappears. Frank Summers of Roswell, New Mexico, told the author that heating removes the onion odor and leaves a delicious honey. There are several wild species visited by bees.

ORANGE (Citrus sinensis). A leading honey plant in southern Florida, Texas, Arizona, and California. The trees bloom in March and April and produce a white to extra-light amber honey with a distinctive flavor and the aroma of orange blossoms. In Florida, Spanish needles, a low herb, blooms at the same time and its honey often gives a reddish color to the orange honey. Grapefruit blooms at the same time and adds materially to the crop of citrus honey. C. C. Bradley of Davenport, Fla., reported that 230 hives averaged 200 pounds each in 1939. Almost every fruit stand has a display of orange honey in that state.