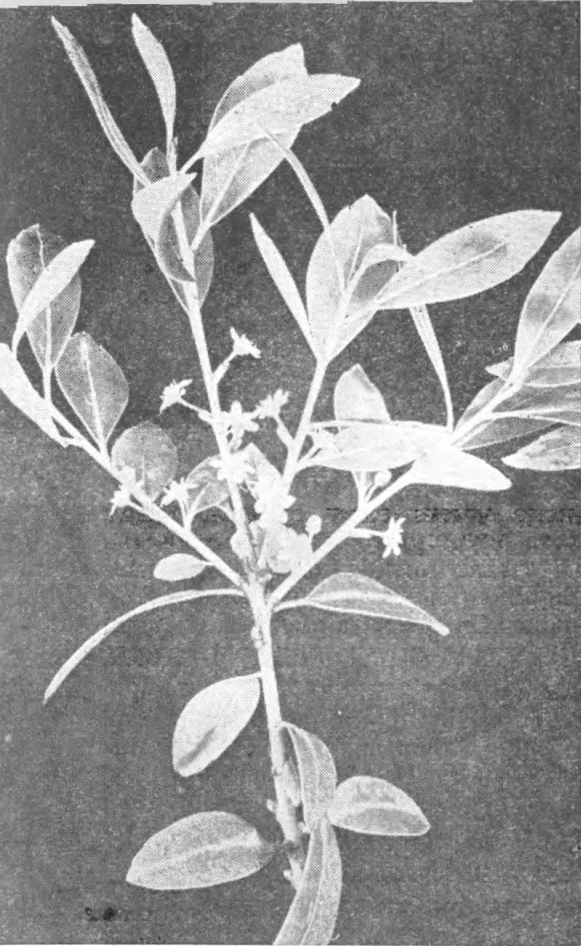 the time because of very dry weather.

LABRADOR TEA (Ledum groenlandicum). A low shrub up to 3 feet belonging to the heath family with leaves densely hairy beneath and clusters of many white flowers. Bees visit the flowers for nectar. E. C. Martin lists Labrador Tea as a July honey plant in Manitoba

LEATHER LEAF, CASSANDRA EATHER LEAF, CASSANDRA (Chamaedaphne c a l y c u l a t a). Low shrubs growing in northern bogs and shores of lakes from arctic regions south to New England, Indiana, and Iowa. Long racemes of bell-shaped, white flowers appear in April or May. R. E. Johnson of Barre, Mass., moves his bees to swamps to build them up on the nectar from leather leaf so that they will be strong enough to gather a surplus from the apple bloom.

LEUCOTHOE (Lcucothoe s p p.). Small shrubs with white, bell-shaped flowers in dense, one-sided racemes, growing along the east coast and blooming in April or May. According to some reports the honey is poisonous. In southern Georgia, according to A. V. Dowling, bees store a 20 to 30 pound surplus of Andromeda-Leucothoe honey, often mixed with spring titi.

LIMA BEAN (Phaseolus limensis). A widely cultivated legume from which bees store a water-white, mild-flavored honey with a characteristic yeasty flavor. Surpluses up to 60 pounds are sometimes reported.

LIZARD’S TAIL (Saururus cernuus). An aquatic herb with long spikes of white flowers with a curved end, blooming in June or July. Bees work it heavily in Mississippi and Louisiana where it covers acres of swamps but no surplus has been reported.

LOCUST, BLACK (Robinia pseudoacacia). An irregularly branched tree with pinnate leaves, small thorns on the branches, large clusters of peashaped flowers, and the fruit a small pod. The honey is water-white with a good flavor but the trees bloom so early in April or May that colonies are not usually strong enough to store a surplus. Claude Rose of Madison, Indiana, regularly harvests and markets a small surplus from black locust.

MALLOW, ROSE (Hibiscus Moscheutos). Also called ROSE-OF-SHARON. Tall perennial herbs with pink or white flowers, 4 to 6 inches across, distributed from Massachusetts south to Florida and Louisiana. The cultivated hibiscus (H. syriacus) has been introduced from Asia. The hon-