remaining liquid. In eastern Massachusetts this shrub is much valued as a honey plant, hundreds of pounds of Clethra honey being gathered annually. As much as 900 pounds has been gathered by three colonies at Westport, Massachusetts. Often there are 7 or 8 supers on one hive. Here it blooms the last of July or the first of August, the time becoming earlier southward. There is about one poor year in every three or four, owing to a late frost, cloudy and rainy weather, or other causes. On the coastal plain of Georgia and northern Florida a surplus is also obtained. A shrub growing 6 to 8 feet tall, with white flowers in racemes. (Fig. 43.)

CLIMBING BONESET (Mikania scandens). — Also called climbing hemp-weed. A twining vine, 5 to 15 feet long, with heart-shaped leaves, growing in swamps and along streams from New England to Texas. The white or purplish flowers are clustered like those of thoroughwort, which they closely resemble. It is abundant in marshy land in Alabama, Mississippi, and Louisiana, climbing over logs, fences, and shrubs. The bloom is eagerly visited by bees but is almost unknown to beekeepers. As a honey plant it is probably only of secondary importance. Like boneset it blooms in late summer and fall. The genus Mikania belongs to the Compositae.

CLOVER (Trifolium). - White clover is the most important species; Trifolium, the most important genus; and the Leguminosae, or pulse family, the most important family among the honey plants of North America. There have been described in the world about 250 species of clover, of which some 64 occur in North America. Many of the species are of little value to bee culture, being rare, or local in distribution, or yielding very little nectar, as the yellow hop clover and rabbit clover. The species which deserve description are white, alsike, crimson, red, and, in a less degree, sour clover. Even these few species are in many regions of no value, either because they will not grow or do not secrete nectar. The great abundance of the clovers is due partly to their great vegetative vigor, which may be partially explained by their strong root system and the presence of nitrogen-fixing bacteria on the roots, and partly to the production of a large quantity of viable seed. All the clovers require lime, since the bacteria which form tubercles on the roots can not live in an acid soil. An acid condition is indicated by the presence of field sorrel, or by the change in color from blue to red of a strip of litmus paper placed in damp 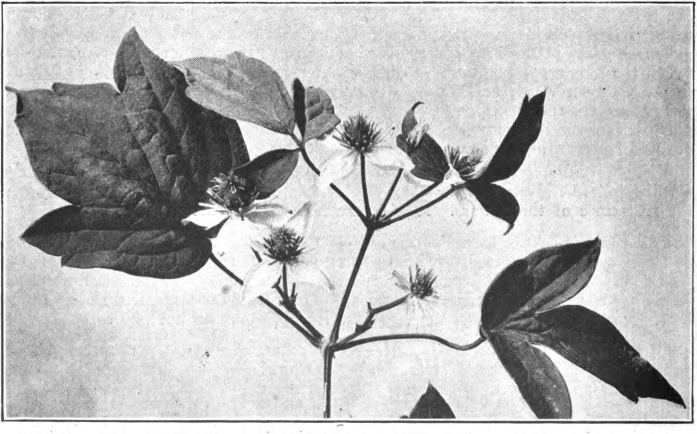