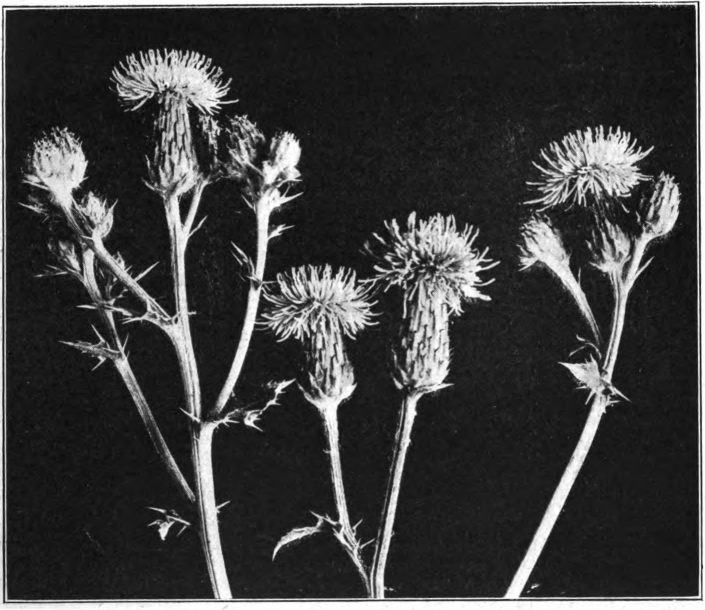 Pink campanilla (I. triloba) blooms in October and November. It is found principally in western Cuba, in the region known as Vuelta Abaja, the great tobacco district, and its abundance is a result of the method of growing tobacco. Tobacco seed is, as a rule, sown on virgin soil, and large tracts of land are cleared every year on both the mountains and coast for this purpose. As soon as the plants are large enough to be transplanted, they are pulled up and shipped to the fields where the tobacco is grown. These tobacco-seed beds are the next year and for years afterward covered with the pink campanilla, which in western Cuba springs up everywhere in cultivated soil. Also called campanilla morada and aguinaldo rosada.

CANADA THISTLE (Cirsium arvense). - Honey very white, of a very fine quality, and a most pleasant flavor. Like many other pernicious weeds, the Canada thistle belongs to the Compositae. It is the source of a small quantity of honey in parts of Canada, and is increasing in some of the central states. The heads are small but very numerous. The nectar is so abundant that it rises in the corolla tubes to a point where it can be reached by nearly all insects. It yields nectar well in dry, warm weather. (Fig. 36.)

In Australia the Canada thistle has spread over large areas and become a “proclaimed weed.“ The honey, says Tarlton-Rayment, is water-white, candies quickly with a fine grain, and is usually associated with clover honey. It has a very mild flavor.

CARPET GRASS (Lippia nodiflora). — The honey is white or sometimes light amber, heavy, and granulates with a fine grain. The quality is fully equal to that of alfalfa. The small white flowers are very attractive to bees, and the flow of nectar is steady and abundant.