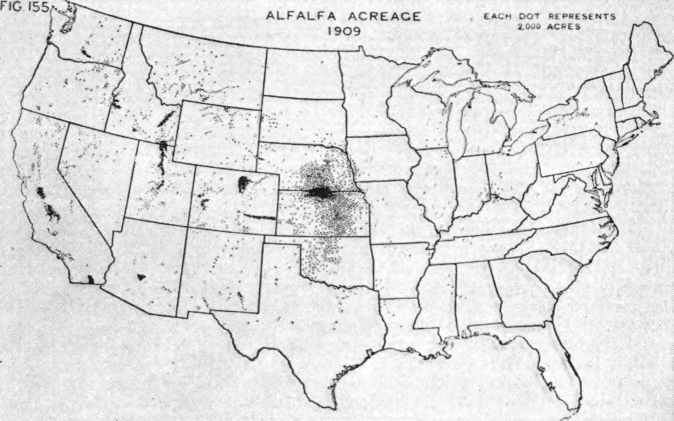 Fig. 14. — Acreage of alfalfa in the United States. Ninety-four per cent, of the crop is grown west of the Missouri River, and nearly one-half of it under irrigation. — (After Baker, Geog. World’s Agr.)

raclo is restricted chiefly to the valleys of the South Platte and Arkansas rivers and the Western Slope. There are few bees in the mountains. Most of the honey is stored from the first and second crops of alfalfa. On the Western Slope beekeeping is confined to the alfalfa areas, as sweet clover grows only along the ditches. In New Mexico alfalfa is grown chiefly in the valleys of the Rio Grande, San Juan, and Pecos rivers; in Utah, in the Uintah Basin, south of the Uintah Mountains, and in the central mountainous belt, where irrigation is extensively practiced; in Nevada, in the western portion of the state; and in Arizona, chiefly in Maricopa County.

Eight-tenths of the irrigated land in Idaho lie in the valley of the Snake River, where there are 650,000 acres of alfalfa. The largest surplus of honey is obtained in the Boise Valley and in the vicinity of Twin Falls and Idaho Falls. Washington and Oregon each report over 200,000 acres of alfalfa, grown almost entirely in the irrigated sections in the eastern portions of the two states. The Yakima Valley in Washington and Umatilla County in Oregon are two well-known centers. Of the 718,000 acres of alfalfa in California, the largest areas are grown in the Great Central and Imperial Valleys. Along the coast it is not important. In the San Joaquin Valley the second and third crops yield most of the honey, while the first and last crops are of little value. In dry seasons alfalfa is the chief dependence of the California beekeeper. (Fig. 14.)

Alfalfa is a perennial, herbaceous plant with trifoliate leaves; violet purple, irregular flowers in short racemes; and spirally twisted pods, each containing several kidney-shaped seeds. A most important character of alfalfa is the taproot, which may extend downward to a depth of 15 feet, enabling the plant to obtain food materials and water accessible to few other field crops. The genus Medicago contains more than 100 species and varieties, natives of the Caucasus and West Siberia, the Mediterranean region, and Northern Africa.

The flowers of alfalfa are known as explosive flowers. The anthers and stigma are held in the keel under elastic tension; and when a bee alights on a flower they are suddenly released, and fly forcibly upward, the anthers discharging their pollen against the under side of the bee. The stigma, which stands a little in front of the anthers, strikes the bee first; and, if the bee is covered with pollen from another