of living bark-lice (Physokermes piceae) on spruce trees at Amherst, Mass. Honeybees by hundreds were humming through the trees and gathering a liberal store of honey-dew. Sweet liquids exuded by the tips of the leaves of cone-trees, which crystallize by evaporation into white sugars, are also gathered. See Chapter on Honey-Dew.

DATE PALM (Phoenix dactylifera). — Large areas of Arizona and California are adapted to date culture, and there are extensive plantations of great age in Lower California and Mexico. The staminate and pistillate flowers are on different trees, or the trees are partly “male” and partly “female.” The flowers are pollinated by the wind, and under cultivation, in order to economize the pollen, it is the practice to bind a sprig of staminate flowers among the pistillate. The white flowers are small, in large clusters, and bloom in early spring. The date palm has often been declared to be a “splendid honey, plant,” but the bloom is nectarless. Honeybees, however, visit the staminate blossoms in large numbers for pollen. (See Palm under Honey Plants.)

ELDER (Sambucus canadensis). — A shrub 3 to 10 feet tall, bearing numerous broad, flat-topped clusters of small white flowers. The flowers are occasionally reported to yield nectar, but they contain neither nectar nor nectaries. All the flower biologists of Europe class them as pollen-flowers. Bees gather the pollen, which is moderately abundant. It blooms in July, and grows in moist soil from New Brunswick to Texas. Elderberry. Elder-blow. American elder. Sweet elder.

ELM (Ulmus americana). — A large and well-known tree, widely planted for shade and ornament. The purplish flowers are wind-pollinated, and appear in spring before the leaves; they are partly perfect and partly unisexual. In a time of scarcity bees have been known to resort to the elms for pollen by thousands. Honey-dew is also gathered from the leaves. Canada to Florida and Texas. (Fig. 9.) 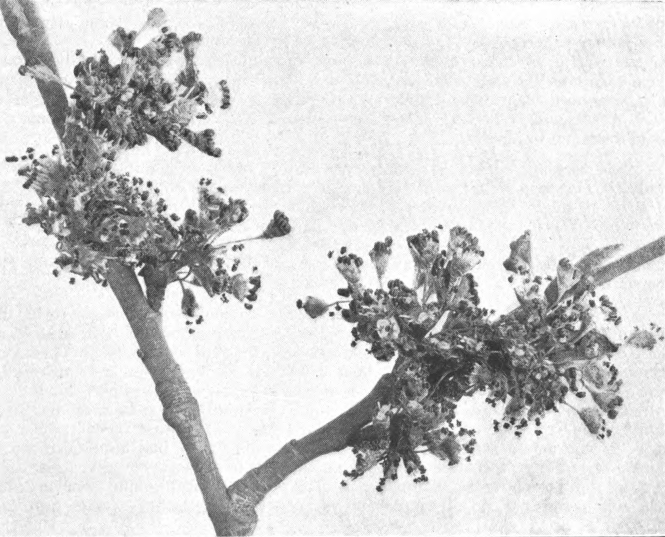