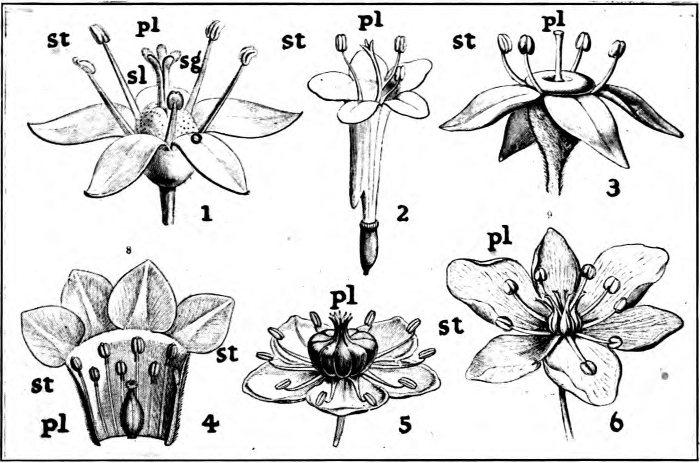 (s). The sepals are not always green but may be bright-colored, as in the fuchsia, larkspur, and columbine. The calyx protects the inner, more delicate organs, especially in the bud, when it alone is visible. The second circle of leaves is larger and usually bright-colored—red in the rose, yellow in the buttercup, and blue in the violet—this is the corolla, or little crown, and each leaf is a petal (p). The brilliant hues of the corolla are designed to attract the attention of insects. Next to the corolla stand the stamens (s), threadlike stems bearing the anthers, each of which consists of two sacs filled with fine yellow grains of pollen. The pistils (pl) occupy the center of the flower (Fig. 2). Usually a pistil consists of three parts: the ovary (o), style (sl), and stigma (sg); but the style is sometimes absent, when the stigma becomes sessile, or stemless. The base of the pistil is the ovary, or seed-case, containing the nascent ovules (seeds) which at first are unfertilized; the style is a porous stalk rising from the ovary and bearing at its upper end a glutinous receptive surface or stigma. Pollination is the transfer of pollen from the anthers to the stigma. If the pollen is from the same flower it is self-pollination; but if from a flower on a different plant it is cross-pollination. Pollen from another flower on the same plant is essentially the same as self-pollination. The offspring from cross-pollination between varieties of the same species, or between different species, are hybrids.

The stigma secretes a glutinous liquid which causes the grains of pollen to adhere to its surface. If the proper conditions exist the pollen grain soon sends out a slender tube which grows down through the porous style, by which it is nourished, until it comes to an ovule in the ovary. It enters the ovule by a little orifice (the micropyle, or little gate), and there passes from the end of the tube a male cell or sperm, which fuses with an egg cell in the ovule. This is fertilization. Fertilization may be defined as the union of two specialized cells of unequal size, the smaller being the sperm and the larger the egg. Pollination and fertilization are often