and southern Michigan to the Kissimmee River, Florida, southeastern Missouri, and the Brazos River, Texas. The seventh edition of Gray’s Manual ranks the black tupelo (N. biflora) as a variety of this species, and undoubtedly beekeepers very often confuse the two trees. While pepperidge grows on high land it requires moist soil. In North Carolina the black tupelo (N. biflora) is common in the southeastern swamps, while pepperidge (N. sylvatica) extends westward to the center of the state. Both species are called black gum in this state, and the beekeepers do not distinguish carefully between them.

The bark and leaves of the sour gum or pepperidge are very similar to those of the black tupelo. The flowers open from April to June, according to the locality; the staminate are in dense clusters, the pistillate 3 together. While the bloom yields nectar, it is apparently of much less value to the beekeeper than either the white or black tupelo. 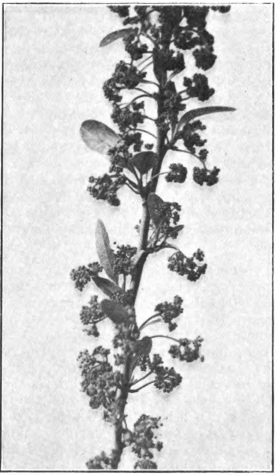 Ogeche Plum (N. Ogeche). Ogeche lime. Wild lime tree. Gopher plum. A small tree, reaching a maximum height of 60 feet, but seldom more than 30 to 40 feet tall. Common in the river swamps of South Carolina, Georgia, and Florida. The greenish-yellow flowers appear from January to May, the staminate in round heads, the pistillate solitary. The fruit is red and very acid. In Florida it has been reported to bloom just before the white tupelo and to yield a white, thin honey.

Bush Tupelo (A. acuminata). This species is a mere shrub, growing 6 to 10 feet tall, and peculiar to the pineland swamps near the coast of Georgia. The bark is smooth and the branches and twigs red. The honey is thick and white, closely resembling that of white tupelo, but has a greenish tinge.

The white and black tupelos (A. aquatica and N. biflora) are commonly found in the same swamplands from Virginia to Florida. In the swamps near Norfolk,