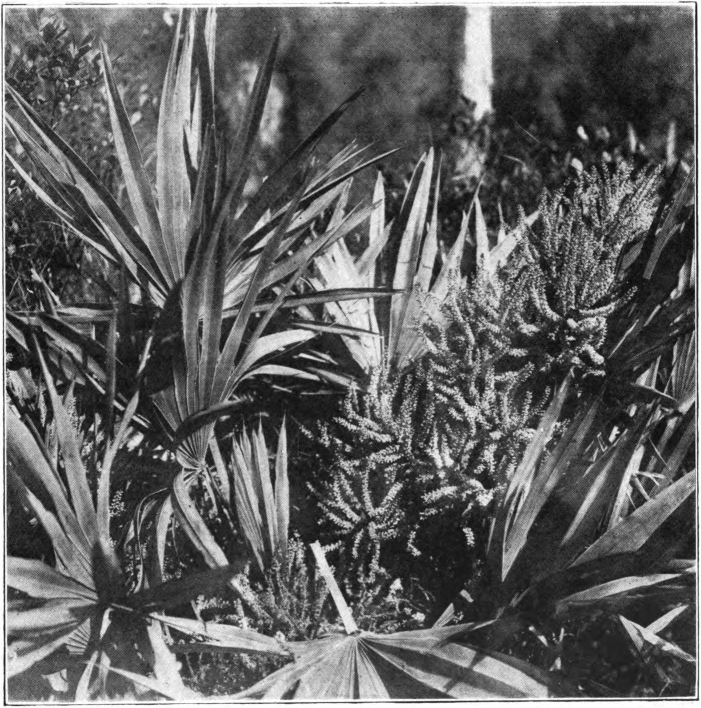 blooming-period causes the flowers to mildew, and too much heat, to wither. In the flatwoods the plants are often stunted and do not yield as well as where they grow larger. When both soil and weather conditions are favorable there is a profuse secretion of nectar. From 6 to 8 pounds daily per hive have been reported from this source, and 8 or 9 are not unknown; an average of 100 pounds per colony has been secured. The honey is lemon yellow, thick and heavy, with an aromatic flavor and fragrance. It is considered one of the finest honeys of Florida, but possibly is surpassed by tupelo honey. It granulates, but not as quickly as orange honey. (Fig. 97.)

PALO VERDE (Parkinsonia torreyana). — Also called green-barked acacia. A small tree growing in the desert regions of Arizona, southern California, and Lower California, with bright-green branches and large, showy golden flowers. It blooms in spring and is abundant on the hills of Arizona, where it is attractive to bees, and is listed as a honey plant. When the water supply fails the trees drop their leaves and depend on the green bark for the making of food. If there are autumn rains a new crop of leaves may unfold.

PARSNIP (Pastinaca sativa). — A common weed in eastern North America, growing by the roadsides and in waste places. The yellow flowers are in large