blends well with other honeys. In the vicinity of Hawks Park, Fla., it blooms almost simultaneously with mangrove, so that the two honeys are always secured together. Farther south they are obtained separately. (Fig. 95.)

PALMETTO, SAW (Serenoa serrulata). — This species, which closely resembles the scrub palmetto in -flower and fruit, also gives a large honey flow. The honey is similar to that of the scrub palmetto, with which it is usually mixed, as it blooms at the same time. The saw palmetto has a wider distribution, extending from North Carolina to Florida and Texas, and becoming a small tree in southern Florida. Unlike the scrub palmetto, the edges of the leaf-stalks are armed with rigid, spinelike teeth, and the margins of the leaves have no threadlike filaments. No doubt the two species are often confused. 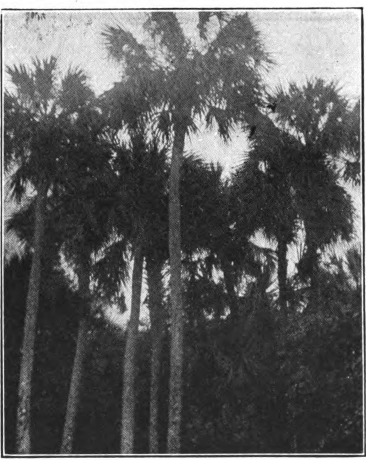 foliage is not injured by frost, and, when burned to the ground, a new growth requires only a year. The scrub palmetto grows well over the southern two-thirds of the peninsula of Florida, becoming rarer and smaller toward the northern boundary of the state. It reaches the largest size south of a line extending from Tampa to the east coast. On the west coast north and south of Tampa it forms an unbroken sea of green. The traveler on the Seaboard Airline Railroad may ride for miles without losing sight of the scrub palmetto, which offers an impressive appearance in such large masses. It grows over all of the “flatwoods,” or low pine lands, which overflow more or less during the rainy season, also along all the water courses, and on the edges of the heavy hammocks. The latter places are the most suitable, for there these shrubs grow 8 feet or more tall and yield the most honey. The stunted plants in the flatwoods do not yield as well. There are still large areas of scrub-palmetto hammocks and flatwoods as yet unoccupied by beemen, which offer an attractive field for bee culture. An objection to these localities is that the palmetto is usually the only nectar-secreting plant in the region, and colonies must be watched closely or they will run out of stores in seasons when it does not bloom.