commercial orange crop is confined to Florida and California, but there is a belt of orchards along the coast of the Gulf of Mexico from Florida to Texas, and also an area in southern Arizona.

In northwestern Florida, west of the Suwannee River, and northeastern Florida north of St. Augustine only a very small area of citrus fruits is under cultivation. In the central lake region, comprising the eight counties of Alachua, Marion, Putnam, St. John, Volusia, Orange, Lake, and Sumter, there are over a million and a half of trees. Along the west coast in Citrus, Hernando, Pasco, Hillsboro, and Manatee counties there are also numerous orange groves, Hillsboro County reporting a larger acreage than any other county in the state. Farther south Polk, Brevard, and DeSoto counties each contain over 200,000 trees. Lee County, the seat of the Big Cypress Swamp, commonly regarded as a wilderness, has also many orange groves. Lemons are produced principally in southern California, but there is a small acreage chiefly in Monroe County in the southwest corner of Florida. The grapefruit orchards are found in western Florida, in Lee, Manatee, and Hillsboro counties. Limes are grown commercially only in the southern tip of Florida (Monroe County) and the adjoining islands. It has been estimated that there are in this state 10,000 square miles adapted to orange culture (Fig. 90.) 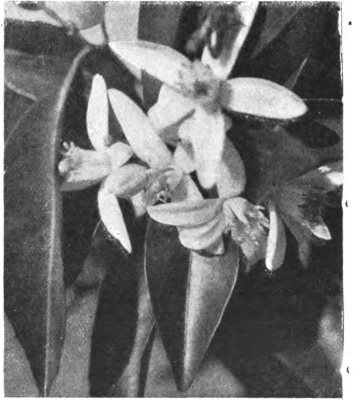 The date of the beginning and the length of the period of blooming vary greatly in Florida according to the variety of the fruit, the extent of cool weather in winter and early spring, and differences in rainfall and soil. For instance, in the middle of the state flowers have been seen on the round orange as early as Feb. 6; but in 1912 the first bloom did not appear until March 15. On an average Feb. 20 is the date on which blossoms begin to appear in this section. The spring of 1915 was unusually cold and rainy, and the flowers did not open until about the first of March, and did not yield nectar well until the end of the month, when the bloom became very abundant. Usually nectar is not gathered later than April 10; but this year a hive on scales showed a gain of three pounds on April 20, and the flow did not cease entirely until a few days later. The trees remain in blossom for about four weeks, if the weather is not too hot and dry. As a rule the later the bloom appears, the shorter the time it lasts. Cool and frosty weather will prolong it unless the frost is so severe, as in 1911, that it injures the blossoms, when it brings the flow speedily to a close. The average surplus in a good year is about 40 pounds. (Fig. 91.)

A large acreage of oranges, mostly of the Satsuma variety, has been planted along the coast of the Gulf of Mexico from Florida to Texas, but the bloom does