leaves, resembling a pear tree, found on sandy beaches in southeast Florida, on the Keys, in the West Indies and tropical America. It has an acid milky juice, which is very poisonous and was used by the Caribs to poison their arrows. “Probably the most poisonous member of our arborescent flora. The juice and the smoke from the burning wood are very injurious to the eyes.” The yellowish-green flowers are very small and open from February to April. Occasionally it is reported to yield heavily.

MANGO (Mangifera indica). — The mango tree grows in the southern part of Florida in hammocks and on some of the Keys. The small whitish flowers are in large clusters or panicles composed of 200 to 4000 flowers. Some varieties remain in bloom but 10 days, others for nearly two months. Nectar is secreted in small drops on a white disc, collecting in larger quantities at the base of the petals. Honeybees are important visitors and are also fond of the overripe dropped fruit. 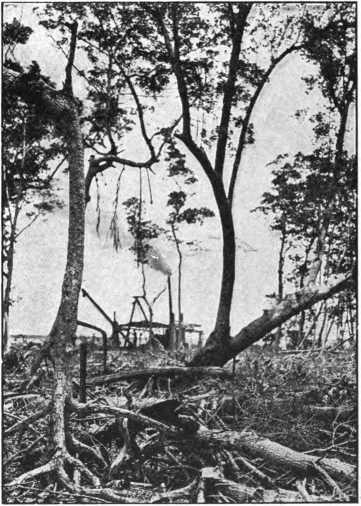 MANGROVE, BLACK (Avicennia nitida). — There are in southern Florida three different trees called mangrove — the red mangrove, the white mangrove, and the black mangrove. The red mangrove (Rhizophora Mangle), an evergreen shrub or tree, belongs to the mangrove family. Along the coast of southern Florida and the Keys it forms dense tidal swamps, advancing into the water where the shores are flat and mucky. The seeds germinate while still on the tree, and, falling into the mud in an upright position, immediately strike root. The trunk and branches send out aerial roots, which, descending in an arched fashion, give the tree the appearance of stepping forward. The flowers are small and yellowish.

The white mangrove (Laguncularia racemosa), also called white buttonwood, is a member of the white mangrove family. It is common on the seashore of peninsular Florida and in the West Indies and tropical America. In Florida it is commonly a shrub with leathery oval leaves and small greenish flowers. Neither the red mangrove nor the white mangrove is of value to the beekeeper.