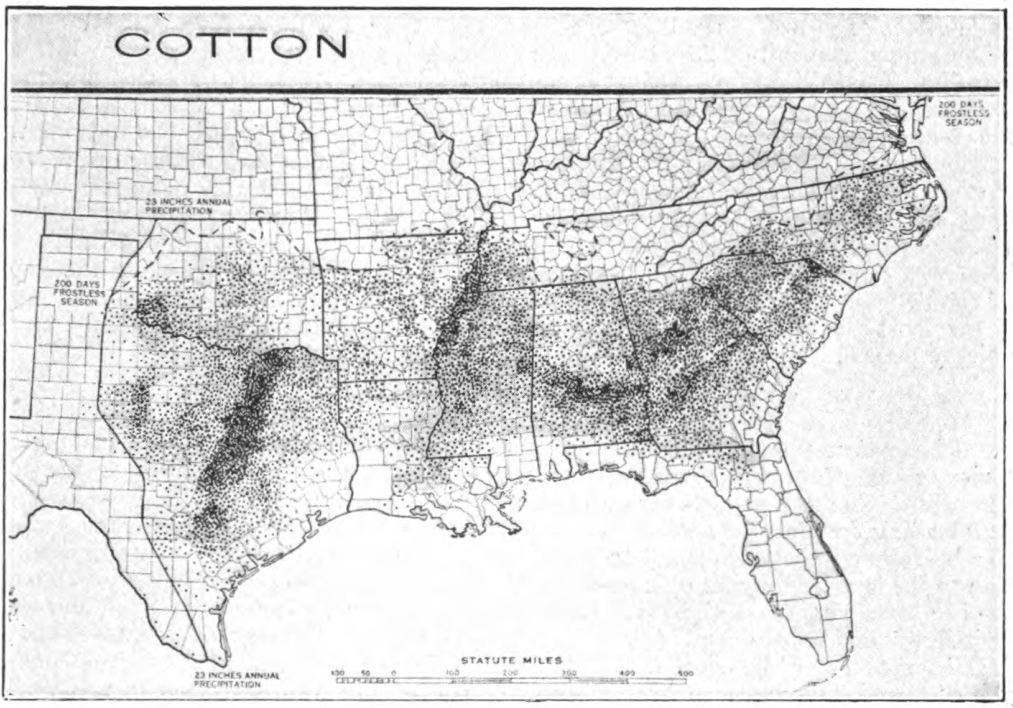 Upland cotton (G. hirsutum) is a perennial, but is commonly treated as an annual. It requires at least six months free from frost. The plant grows from 3 to 10 feet tall, and bears alternate, palmate leaves with 3 to 5 lobes. The large erect flowers are 3 inches across, and on the first day are a creamy white or pale yellow; but soon after midday they begin to turn reddish and on the second day are a deep reddish purple. The flowers of Sea Island cotton are yellow with a reddish-purple spot at the base of each of the five petals. The 5 sepals are united into a cup or calyx, and below the flower there is an involucre or whorl of 3 green leaflike bracts. The involucre becomes dry and brittle, and is often torn off with the boll by careless pickers.

When ripe the boll, or seed vessel, splits into 3 to 5 lobes, locales, or locks, containing the seeds covered with long fibrous hairs or cotton, a provision for their dispersal by the wind. A lock seldom contains more than 9 seeds. The cotton fiber is known as lint, floss, or staple, and varies greatly in length — the greatest difference between short-staple and long-staple varieties being nearly an inch. When the fibers are under 1 1/8 inches in length the cotton is short-staple, and when more than this length it is long-staple. In Sea Island cotton the staple, or lint, may be 2 inches long. The lint varies greatly in length, and in color from white to yellowish brown. As the fiber dries it becomes flattened and twisted into a spiral like a corkscrew, when it can be spun into a thread even by the fingers, since the spirals adhere to each other.

Cotton ranks second in value among the crops of the United States, and in the cotton belt its value exceeds that of all other crops combined. In 1920 the acreage was 35,504,000 acres, and the average annual number of bales produced during five years (1914-1918) was 12,424,000. The northern limit of cotton growing in this