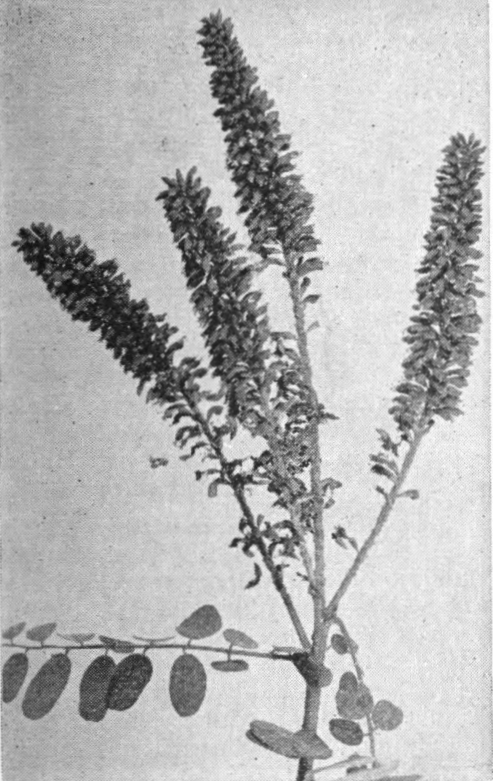 blooms in June and July and is often visited by bees for nectar.

IRONWEED Vernonia spp.). A tall, coarse composite with numerous heads of purple flowers blooming from August to October in the eastern states. It takes over neglected pastures and waste land. The honey is amber with a fair flavor but surpluses are small and mixed with other fall flowers.

JOE-PYE-WEED, QUEEN-OF THE-MEADOW (Eupatorium purpureum and spp.). Perennial herbs 3 to 8 feet tall with large clusters of composite heads with tubular, purple flowers. Common in low, damp ground in the eastern states during late summer. Edward Babb reports an amber honey is collected from it in the Berkshire Hills of Massachusetts. Usually the honey is mixed with other fall flowers.

LAVENDER (Lavandula officinalis). Small, shrubby plants 3 feet tall with slender leaves and bluish flowers in long interrupted spikes. Cultivated around Olympia, Washington, for its oil which is used in perfumes and soaps. R. R. Ruud produces lavender honey which is extra-light amber with a good body and flavor. A large amount of lavender honey is produced in southern Europe.

LESPEDEZA Lespedeza spp.). An important legume with purple flowers which is widely planted for forage, soil building, and wildlife food. From a 200-acre field of lespedeza, I. T. Hepp, Rock Hill, S. C., harvests from 1 to 2 thousand pounds of light amber honey with a yellow tinge and a good but different flavor. There are many species both wild and cultivated that are visited by bees for nectar.

LOOSESTRIFE, PURPLE (Lythrum Salicaria). A tall herb with long, slender leaves in pairs and dense spikes of purple flowers. Purple loosestrife is widely established from Canada and Minnesota south to Virginia and Missouri in marshes, swamps, and low land along streams especially in marshes along the coast. It blooms from June to September and produces a greenish honey resembling motor oil with a fair to good flavor. A beekeeper in Ontario obtained 260 pounds per colony near a 500-acre swamp and good surpluses are obtained in Massachusetts and New York. Beekeepers in Massachusetts describe the honey as light and clear but those in New York report it to be dark and greenish.

LUPINE, BLUEBONNET (Lupinus texanus and spp.). Low herbs with palmately compound leaves and elongated clusters of pea-shaped blue flowers, the stamens form a closed tube with no opening for the bee’s tongue and no nectaries. It is most common in Texas and adjacent states where bees collect plenty of pollen but reports of honey from lupine are apparently erroneous.