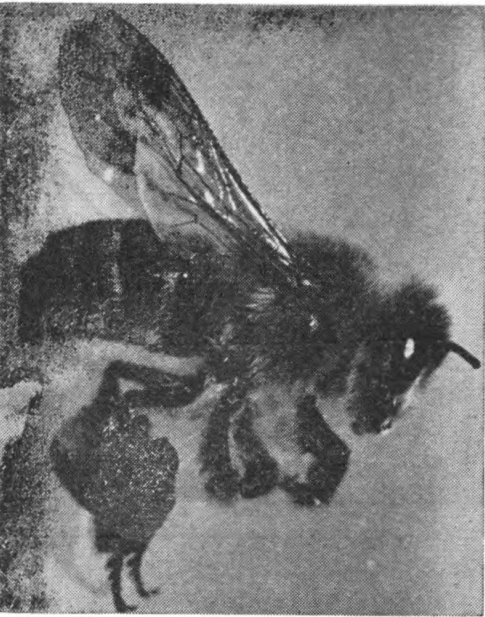 A bee with pollen on its legs. —Photo by W. P. Nye

set unless pollination is brought about by bees or other insects. Melons are extensively grown in California, Colorado, Missouri, and other central and southern states.

MESQUITE, ALGAROBA (Prosopis juliflora). A straggly tree with twice compound leaves and long clusters of greenish-yellow flowers. In Texas it is often the leading honey plant blooming in the spring and again in the summer. Surpluses up to 200 pounds of an extra-light amber honey with a mild flavor are reported with average yields of 50 to 75 pounds common. It is important in Texas, New Mexico, Arizona, and southern California, and in modern times has migrated into Oklahoma, Utah, and Nevada. The great ranches have destroyed mesquite and other desert shrubs to improve pasture.

MUSTARD (Brassica nigra and spp.). Weedy annuals with yellow flowers in long racemes, petals 4 (forming a cross) and 6 stamens. The honey is light amber with a yellow cast usually mild in flavor but so thin it may ferment in the combs. Rape (B. Napus) yields some honey in Saskatchewan according to Percy Wright. White mustard (B. alba) is grown for mustard seed and yields some honey. Cabbage (B. oleracea) is grown for seed in Wash ington and produces a white mild honey. Turnips (B. Rapa) produced 25 to 50 pounds of light amber honey in Oregon according to C. F. Turnipseed (See YELLOW ROCKET.)

NAPA THISTLE (Centaurea melitensis). A yellow flowered composite which is widely distributed in California grain fields where it yields a light amber honey of good quality.

OREGON HOLLY-GRAPE (Mahonia Aquifolium). Evergreen shrubs up to 6 feet, the compound leaves with spiny-toothed margins and clusters of bright-yellow flowers. They occur in many western states where they bloom in the spring. Bees work holly-grape freely for both pollen and nectar. It is very useful for early brood rearing. Holly-grapes have been extensively planted in the eastern states for their evergreen foliage.

PALMETTO, DWARF Sabal minor). Also called BLUE STEM. A stemless plant with fan-shaped leaves and flower clusters several feet long arising from the underground stem, particularly common in Louisiana and east Texas and up the Mississippi River Valley to Arkansas. It blooms in June or early July. It produces a good quality yellow honey. E. Oertel reports (Bees, July, 1949) that experimental colonies in Avoyelles Parish in Louisiana made net gains or 65 to 200 pounds in a month chiefly from Dwarf Palmetto.

PALO VERDE (Cercidium floridum). An all-green tree up to 25 feet tall with yellow flowers in clusters, the leaves soon falling leaving the bare green branches. It is common in parts of Arizona and southern California. C. A. Brion obtains from 20 to 30 pounds surplus of good quality honey with a light yellow color from Palo Verde.

PARSNIP (Pastinaca sativa). The wild parsnip has compound, toothed leaves, coarse stems up to 3 feet tall, and broad, flat-topped umbels of small yellow flowers. It is a common roadside weed over much of the United States. From the cultivated parsnip