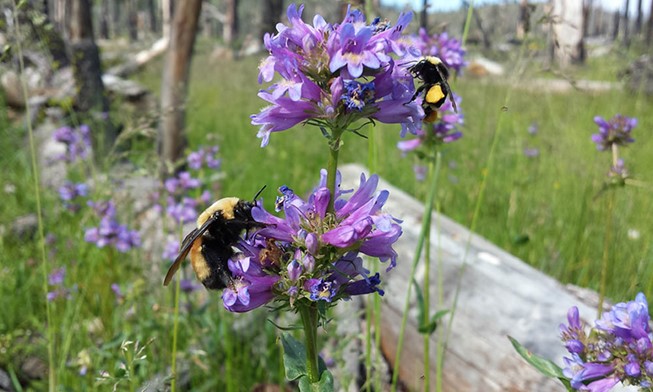 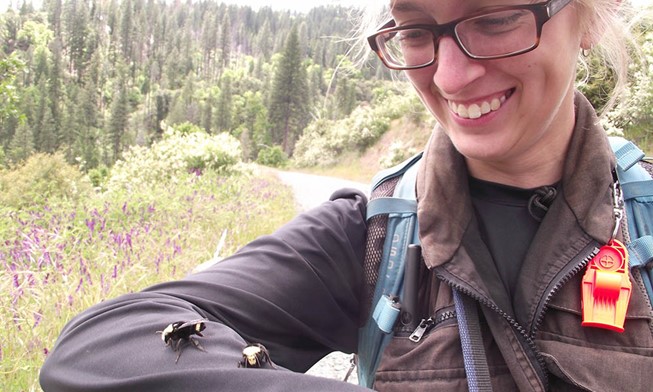 Two Vosnesensky bumble bee (Bombus vosnesenskii) queens warm up on the sleeve of field biologist Alma Schrage prior to release. (Photo courtesy of The Institute for Bird Populations) 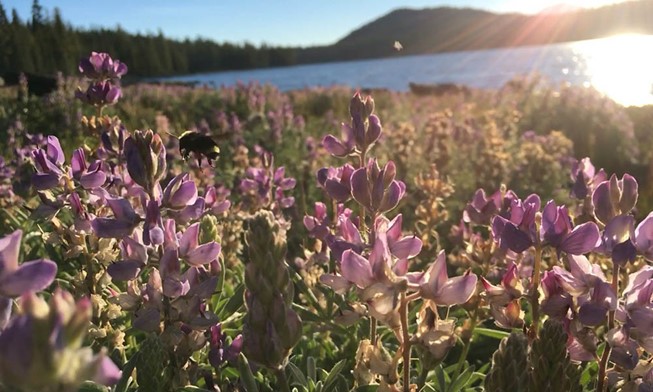 A Vosnesensky bumble bee (Bombus vosnesenskii) flies in a field of lupine flowers. (Photo by Spencer Hardy, The Institute for Bird Populations)

Many species of North American bumble bees have seen significant declines in recent decades. Bumble bees are essential pollinators for both native and agricultural plants, and their ability to fly in colder temperatures make them especially important pollinators at high elevation and at high latitudes. Bumble bee declines have been attributed to a handful of factors, including lack of flowers.

Not all flowers are used equally by bumble bees, and just as importantly not all flowers are equally available to them. Different species of flowers vary in abundance from year to year and over the course of a summer. Identifying which flowers bumble bees choose can help scientists understand which plants they need, but putting that choice in the context of what is available to bees across a landscape gives a more accurate picture of which flowers are highly valued. Identifying these highly valued plants can aid bumble bee conservation by pinpointing the resources they need to thrive.

New research published today in the journal Environmental Entomology examines which flowers bumble bees select in the Sierra Nevada region of California. Researchers from The Institute for Bird Populations, the University of Connecticut, and the USDA Forest Service compared which species of flowers the bees used relative to the availability of each flower species across the landscape. They found that each bumble bee species in the study selected a different assortment of flowers, even though the bees were foraging across the same landscape. This information can be useful to land managers who are restoring or managing meadows and other riparian habitat for native bumble bees.

This study of bumble bee floral use was unusual because it factored in the relative availability of each plant species to the bees. “It’s important to consider the availability of plants when determining what’s selected for by bees,” says Jerry Cole, a biologist with The Institute for Bird Populations and lead author of the study. “Often studies will use the proportion of captures on a plant species alone to determine which plants are most important to bees. Without comparison to how available those plants are, you might think a plant is preferentially selected by bees, when it is simply very abundant.”

But defining “availability” in ecology is a tricky thing. It requires considering things both from a bee’s perspective (how far it is willing to fly for a favorite flower?) and from the field biologist’s perspective (how many flowers are too many to count and identify in a reasonable amount of time?). “Defining the area of availability is tough if you aren’t using survey plots,” says Helen Loffland, a meadow species specialist with The Institute for Bird Populations and co-author of the study. “Many people use a wandering transect to capture bees, so then the availability is a bigger and more nebulous space.” And once you’ve defined an area of availability, “it’s just a lot of plant ID,” she adds.

Rather than using a “wandering transect” approach, the researchers captured, identified, and released bumble bees at over 400 sample plots in the Plumas National Forest. They recorded the flower on which each bee was captured and estimated the availability of different flower species in the plot. Though they captured bumble bees on over 100 different species of flower, only 14 of these plant species were preferentially selected by any of the bumble bee species. Thirteen species of bumble bees were captured; among the five most common species, each selected a different assortment of flowers, and each selected at least one flower species that was not selected by the other bumble bee species.

Accounting for availability led to a different interpretation of how bees selected flowers than had the researchers looked solely at which plants bees used. For instance, the van Dyke bumble bee (Bombus vandykei) used Monardella odoratissima and Phacelia spp. flowers with about equal frequency. But the Monardella flowers were very abundant, and the bees did not use them more than expected given their availability. In contrast, Phacelia flowers were less abundant and the bees used them more frequently than expected given their availability, indicating that they were preferentially selecting them.

The USDA Forest service has already put the study’s results to use. “Restoration planning on the Plumas National Forest is already using these results to identify areas where restoration efforts may increase availability or improve quality of bumble bee habitat,” says co-author Matthew Johnson, who is the Wildlife, Fish, Rare Plants and Invasive Species Program Manager at the Plumas National Forest.

A better understanding of bumble bees’ flower choices will aid in conservation of declining bee species. “This sort of knowledge can really increase the effectiveness of restoration for bumble bees,” says Loffland, “and in a way that is relatively easy and cost-effective to implement.”