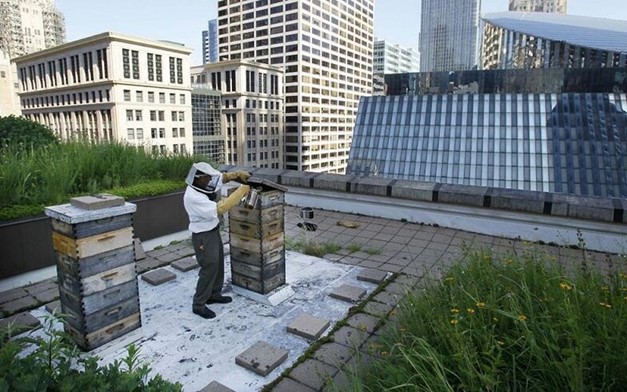 What happens when every company decides that the sustainable thing is to put a beehive on the roof.

Urban beekeeping is big business: Alvéole, one company based in Montreal, manages thousands of beehives on the rooftops of more than 600 office buildings in North America, at corporations that host bees (and offer free honey) as an employee perk. You can pay other companies to take care of a beehive in your backyard.

The number of hives in cities keeps growing. In Paris, for example, the number of registered hives has jumped up by a factor of eight over the last decade. It’s billed as good for nature. But a recent study that looked at the growth of beekeeping in Swiss cities finds that the number of bees is now unsustainable: When the bees fly out to find pollen, there aren’t enough urban flowers to support them. And the honeybees may be putting pressure on other pollinators.

In Switzerland, the researchers saw the same trend that’s happening elsewhere, with strong growth in beekeeping in almost every city between 2012 and 2018 (in the Swiss city of Lugano, which they studied, the number of hives grew 2,387%). Then they looked at the green space available around clusters of hives. In each city, there weren’t enough “floral resources” for the huge number of new bees.

The study doesn’t analyze how the surplus of bees might be impacting other wildlife, but it does note that honeybees can negatively impact the number of wild pollinators in an area. In a place like the U.S., where European honeybees were imported for agriculture, they compete with wild bees and butterflies, which are already at risk for other reasons, from pesticide use to climate change.

Adding more green space and pollinator-friendly plants in cities would help. But the study suggests that cities also need to set limits on the proliferation of urban honeybees, with the number of hives allowed in any particular area limited by the amount of green space nearby and enough distance between hives. And companies that are adding bees to make their image greener—something that some critics have called “bee-washing”—might want to rethink their plans.